Published: May 1, 2014 By: Sarah Carey Category: University of Florida, College of Veterinary Medicine 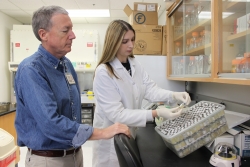 The University of Florida now houses a scientifically priceless collection of specialized bacterial specimens that researchers around the globe can access to seek potential remedies for diseases that affect plants, animals and humans.

Locked away within the veterinary medical complex in a space comprising approximately 40 cubic feet are 12,000 freeze-dried specimens of these bacteria, called mycoplasma.

It represents the world’s largest and most comprehensive assortment of the smallest living cells yet discovered, said Daniel R. Brown, Ph.D., an associate professor of infectious diseases at the UF College of Veterinary Medicine and chairman of the board of the International Organization for Mycoplasmology. Researchers will now be able to easily access specimens to study these microbes.

Although it is difficult to find documentation of economic impact of these microorganisms, one recent report put the impact of mycoplasmas on poultry in California alone at $7 million to $10 million annually, Brown said.

“In Africa, $50 million to $100 million has been lost in cattle production due to certain species of mycoplasmas that we have eradicated in the U.S,” he said, adding that other strains cause economically significant losses in milk production.

Some mycoplasma species cause respiratory disease in pigs, causing significant losses in pork production, and a very important pathogen causes “atypical pneumonia” in humans known to account for up to 20 percent of all cases of human pneumonia in the U.S. and Western Europe.

In addition to their global significance as disease agents, mycoplasmas are important model systems for membrane biology, structural genomics and evolutionary bioinformatics as well as for defining the minimal requirements of a living cell, Brown said. 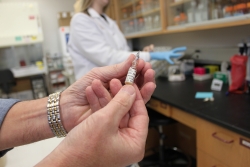 “The collection represents a living encyclopedia, as the many isolates archived within the collection provide a historical narrative dating back to the genesis of mycoplasmology,” said Nigel Harrison, Ph.D., an associate professor of plant pathology with UF’s Institute of Food and Agricultural Sciences, based in Fort Lauderdale. “As such, the collection is an irreplaceable resource of reference strains for use by scientists dedicated to the study of these unique cell wall-less bacteria.”

Although some of the better-known strains are represented in other collections, only UF has strains of almost every species, Brown said.

“For example, we have all of the veterinary pathogens, but not all of the other collections would have those,” he said.

Most of the bacteria are host-specific primary pathogens, best known for causing respiratory, urogenital or reproductive diseases in humans and livestock, poultry, companion animals or wildlife, Brown said. Other bacteria in the collection can cause severe growth disorders in invertebrate animals or plants.

All specimens came from individual animals, humans, plants and insects. The vial labeled Mycoplasma felis, for example, came from the mouth of a cat named Ben in Colorado.

Brown offered UF as a home when a new curator was needed for the collection, which is still officially controlled by the international group and was part of two separate collections at the National Institutes of Health and the U.S. Department of Agriculture.

“I wanted some of the specimens from the collection but didn’t have access to them,” Brown said. “Other people were asking for samples as well. Part of the function of the collection is that these samples be provided to people seeking them. That’s why we have so many.”

Officially known as the Mollicutes Collection of Cultures and Antisera, the specimens represent somewhere between 1,500 and 2,000 strains of mycoplasma, ranging from the scientifically famous to the relatively unknown. They arrived last fall and were meticulously documented by Dina Michaels, a biological scientist who works in Brown’s laboratory.

Samples are relatively cheap — a mere $50 buys a tiny glass vial with a pink- or gold-colored, dust-like specimen inside of it that could make or break a scientific study.

Vials are sold on a nonprofit basis, with recipients covering the cost of shipping and ultimately of replenishing the sample when it starts to run out.

Requests for specimens mostly come from other scientists and also from pharmaceutical industry representatives, Brown said.

Sarah Carey, M.A., A.P.R., is director of public relations at the University of Florida College of Veterinary Medicine, a job she has held since 1990. Formerly, she was editor of... END_OF_DOCUMENT_TOKEN_TO_BE_REPLACED