For more information on our ongoing response to COVID-19 in Gainesville, Jacksonville and Central Florida, visit our coronavirus website. END_OF_DOCUMENT_TOKEN_TO_BE_REPLACED

Earlier this month, Todd Golde, MD, PhD, a professor of neuroscience in the College of Medicine and director of the Center for Translational Research in Neurodegenerative Disease, received word from the National Institutes of Health that UF’s application for an Alzheimer’s Disease Research Center, or ADRC, will be funded. 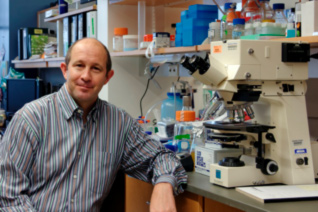 What exciting news! Finding preventive strategies and effective treatments for Alzheimer’s disease, or AD, is one of the country’s most serious unmet medical needs. Moreover, despite the fact that Florida is an epicenter of the AD epidemic in the United States — with 500,000 AD patients and over 3 million residents 65 years or older — there are no active ADRCs primarily based in Florida. In fact, other than Emory University and the University of Kentucky, among the 30 ADRCs nationally, there are no ADRCs in the entire Southeast. The new Florida-based ADRC is a collaborative effort led by the University of Florida and the Mount Sinai Medical Center, or MSMC, in Miami. Other key components of the grant will be performed by faculty at the University of Miami, Florida Atlantic University, and Florida International University. Dr. Golde will be the ADRC program director and Ranjan Duara, MD, who heads the Wien Center for Alzheimer's disease and Memory Disorders at MSMC, will be the ADRC associate director.

The goal of the NIH Alzheimer’s disease program, which includes both Alzheimer’s Disease Research Centers and Alzheimer’s Disease Clinical Centers, is to advance and translate research into improved modalities of diagnosis and care for people with Alzheimer’s disease while focusing on the program’s long-term goal — finding a way to cure and possibly prevent Alzheimer's. Areas of investigation across the country range from the basic mechanisms of Alzheimer's to managing symptoms and helping families cope with the effects of the disease. Although each center has its own area of emphasis, a common goal is to enhance research on Alzheimer's disease by creating a network that shares new ideas and research results. Collaborative studies draw upon the expertise of scientists from many different disciplines.

To further the collective understanding of AD and related dementias, UF and MSMC will coalesce their respective research efforts to capitalize on a number of complimentary strengths: the ethnically diverse clinical population in the Wien Center that will enable us to enroll a cohort that is ~50% Hispanic; the expansive research capabilities at UF; and the infrastructure for translational research provided by the NIH-funded UF Clinical and Translational Science Institute.

A major center grant from NIH requires significant levels of scientific depth and breadth in a discipline, along with supportive institutional infrastructure. In this case, while elements of UF’s AD research community have been in place for many years, the pivotal event was the recruitment of Dr. Golde in 2010 to build the Center for Translational Research in Neurodegenerative Disease, or CTRND, which was to focus not only on AD research, but on other dementias, ALS, stroke and rare neurodegenerative diseases. In fact, Dr. Golde was the first scientist who joined UF under the Forward Together strategic plan, which implemented a philosophy of recruiting highly accomplished senior scientists who would build a team directed at defined scientific and programmatic goals.

When College of Medicine dean Mike Good and I visited Dr. Golde in 2009 (who at the time was at Mayo Clinic, Jacksonville) and presented this plan, he was intrigued by the opportunity to do just that. He decided to move to UF specifically to build the CTRND that would focus on translating basic discoveries in neurodegenerative disease and stroke into new and more effective medical therapies. Competing successfully for an ADRC was a big, but challenging, part of his plan. “By recruiting new faculty to the University of Florida and forging collaborations with existing faculty,” he said, “I hoped to create a dynamic, successful, world class center that can make a difference. Since my arrival, I have been impressed by the intellectual capital, the diversity of the faculty and staff, the richness of resources, and the entrepreneurial spirit that pervades the campus.” However, as Dr. Golde had been recruited primarily to build a wet-bench- based translational research team, it was unclear at that time how he and UF could rapidly expand the clinical research activities that were essential for a competitive ADRC application. Indeed, UF, by itself, did not have the clinical capacity to support a competitive ADRC application.

Fortunately for UF and Dr. Golde, Dr. Ranjan Duara reached out to Dr. Golde a few years ago, saying “Why doesn’t UF consider leading an ADRC application with MSMC running the clinical core?” Dr. Duara made a strong case for MSMC being the home for the clinical core. As he puts it: “We follow a relatively unique population of elderly individuals with or at risk for dementia at the Wien center. Almost 50% of our patients and research participants are Hispanic. Many of them do not speak English and almost our entire staff is trained to do cognitive assessments in both Spanish and English. We also have a large volume of patients who might participate in research. With ~2,500 patient visits a year, we are one of the most active Memory Disorder Centers supported by the State Alzheimer’s Disease Initiative.” Further, MSMC has long-standing experience in the imaging techniques critical to state-of-the-art clinical diagnoses of dementias and was part of the former Florida ADRC based out of USF that lost funding several years ago. Thus, he and his team had real experience in recruiting, retaining and assessing individuals with varying stages of dementia for an ADRC clinical core.

Having heard this from Dr. Duara, Dr. Golde became convinced about the concept of partnering with MSMC. “I was fully on board when the leadership at UF Health and MSMC enthusiastically supported this plan,” said Dr. Golde. Indeed, ADRCs, like any big programmatic grant, leverage significant amounts of institutional resources. Institutional support at both sites would be needed to insure that we could not only compete for an ADRC but actually run one successfully. However, there was still much work to be done to assemble the other components of the grant. In addition to a clinical core, an ADRC has four other cores and three scientific projects. Working for over a year to bring the pieces together, Drs. Golde and Duara first submitted an application in 2013. Although it was not funded that round, both were encouraged by the review. “We had no fatal flaws and in general the reviewers were enthusiastic,” said Dr. Golde.

Addressing the concerns raised in the first round, Drs. Golde and Duara, resubmitted the application last year, and this time received an excellent score that could potentially be funded. However, even as late as June 10th this year, when Dr. Golde was at NIH regarding another grant award, National Institute of Aging, or NIA, program officials told Dr. Golde that the funding was not available this year. It was thus an understatement to say that Dr. Golde and the rest of the team were surprised, when just 6 days later Dr. Golde received a call from NIA indicating that they were likely to fund the grant this year!

Drs. Golde and Duara and all the personnel involved look forward to starting up and running a successful ADRC, but know that it’s going to take a lot of work as it involves coordinating the activities of over 40 faculty and 75 total staff from several institutions. Fortunately, they have had a running start. Over the last several years the State of Florida has provided funds to UF and MSMC that support Alzheimer’ research; indeed, some of the initial studies proposed in the grant were recently supported by a State of Florida grant from the Ed and Ethell Moore Alzheimer’s program. Dr. Golde added: “These funds from the state were essential to positon us to submit a competitive application, and we hope that ongoing state funding will enable us to become one of the premier ADRCs in the country. I’d like to thank the legislature and the governor’s office for recognizing that we need more AD research in the state and for supporting our now successful efforts to obtain an ADRC.”

Further, Drs. Golde and Duara are excited to work closely with two new internationally recognized AD investigators, Dr. Glenn Smith and Dr. Steven DeKosky, who have recently been recruited to the University of Florida. Dr. Smith joins UF from the Mayo Clinic in Rochester, Minnesota, and has been appointed as chair of the department of clinical and health psychology in the UF College of Public Health and Health Professions. Research conducted by Dr. Smith and his colleagues has led to the development of the Mayo Clinic Healthy Action to Benefit Independence and Thinking, or HABIT, program, a nationally recognized 10-day, 50-hour, intensive intervention program for people with mild cognitive impairment. Dr. Smith has also been a key member of the Mayo Clinic ADRC, being responsible for its education core. Dr. DeKosky joins UF as professor of Neurology and Neuroscience and deputy director of the McKnight Brain Institute. He has been a basic, translational and clinical researcher and national leader in AD for many years and was founding co-director of the University of Kentucky ADRC and then director of the Pitt/UPMC ADRC for 16 years. Together, Drs. Smith and DeKosky will provide a wealth of experience that will help the ADRC rapidly meets its goals, and also expand its clinical core activities from the Wien Center to include research participants in Gainesville.

The UF-MSMC ADRC will be focused on achieving a number of specific areas that span a variety of research and educational activities. Clinical research activities include identification of i) markers for the earliest prodromal stages of cognitive impairment and ii) predictors of cognitive and functional decline in Hispanic and non-Hispanic individuals. Another important patient-oriented aspect of the ADRC is to facilitate testing of novel therapies for AD and related dementias in our diverse population. Further, the ADRC will provide unique community and professional training and educational opportunities relevant to AD and related dementias, and thus have a broad statewide educational impact, including training junior investigators and recruiting trainees and investigators at all levels to participate in dementia research. Finally, the ADRC will support translational research studies that are designed to provide additional insights into Alzheimer’s disease that may one day lead to the development of novel therapeutic approaches and novel diagnostic paradigms.

Much like the regional focus of NCI-designated cancer centers, ADRCs are designed to be regional hubs of Alzheimer’s disease and related dementia research activities. Given the burgeoning AD epidemic in the state of Florida, Drs. Golde and Duara hope that the successful competition for an ADRC is just the first step toward making the state of Florida a major force in Alzheimer’s research. Dr. Golde states, “We have such a large population of individuals with AD in Florida and a huge at-risk population. We hope that this ADRC award and the recent investments by the state in AD research are just the beginning of a longer-term investment. Our goal is to change the current understanding of AD and related dementias as being incurable, inevitable and largely untreatable to a new reality in which these diseases are curable, preventable and treatable.”