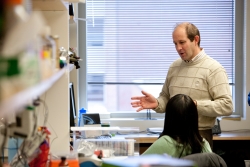 Call it open-source science: To tackle a disease as complex as Alzheimer’s, UF Health researchers have become part of a group that will allow scientists worldwide to access vast amounts of information about the disease.

The goal is to open raw data up to researchers to more rapidly develop new therapies. Four teams from across the country, including one led by University of Florida Health researcher Todd Golde, M.D., Ph.D., were selected to contribute to a National Institutes of Health-led initiative that will provide a portal for research into Alzheimer’s disease. The searchable database will be open to all Alzheimer’s researchers who apply to use the information.

Each research team will submit data it has generated to the portal before it has completed its own research, Golde said. To generate that data, Golde’s team has received an NIH grant of a little more than $1.6 million per year for five years. Their research will examine both human and animal models of the disease.

“The notion is that these are huge data sets with huge amounts of data points and there may be many different ways to analyze it,” said Golde, a professor of neuroscience in the UF College of Medicine and director of the UF Center for Translational Research in Neurodegenerative Disease. “The portal will let the larger scientific community have access to the data for their own study. It’s a new paradigm for how science is going to be done.”

Researchers hope opening access to this type and volume of data will speed up the development of models of how the disease works as well as the discovery of therapeutic targets for the disease.

“This is a real game changer and creates a huge hope for the development of new therapeutics,” said Tetsuo Ashizawa, M.D., executive director of the Evelyn F. and William L. McKnight Brain Institute of the University of Florida.

What will be available in the Alzheimer’s big data portal? Thousands of sequenced data sets of RNA — the molecule responsible for expressing genes — to help researchers worldwide discover therapeutic targets and develop therapies for Alzheimer’s disease.

“This portal will have some of the largest data sets to date and largest publicly available RNA sequencing data on human brains in the diseased state,” Golde said.

The portal will also hold biological and clinical data from more than 2,000 samples from brains with the disease, Ashizawa said. Studies that collected the data and studies that will use the data are both subject to appropriate Institutional Review Board approval, as were the samples when they were collected. Experts who apply for access will also be able to comb through data collected from patient history, physical examinations, neuropathological evaluations and neuroimaging and neuropsychological tests, as well as data collected from cellular and animal models of the disease, Ashizawa said.

“This is a great endeavor,” Ashizawa said. “We are very proud of Todd Golde for taking the initiative of doing big data analysis. He’s a pioneer of this idea, and this is a really exciting time for UF.”

The Alzheimer’s big data portal is part of the Accelerating Medicines Partnership of the NIH, the Food and Drug Administration, a collection of industry and academic scientists and Sage Bionetworks, a Seattle-based nonprofit that promotes open science. The portal will officially be called the Accelerating Medicines Partnership for Alzheimer’s Disease Knowledge Portal.

The three other contributing teams are led by researchers from the Icahn School of Medicine at Mount Sinai, New York; the Eli and Edythe L. Broad Institute of the Massachusetts Institute of Technology and Harvard University; and Emory University in Atlanta.

Other participating researchers are from Rush University, Chicago; Mayo Clinic, Jacksonville; Institute for Systems Biology, Seattle; the University of California, Los Angeles and researchers from other academic centers.

The National Institute on Aging at NIH will support and coordinate the groups’ contributions to the portal.

Science writer for UF Health. Morgan writes about the research of faculty physicians in the College of Medicine. She joined the UF Health staff in 2014. A Michigan native, she... END_OF_DOCUMENT_TOKEN_TO_BE_REPLACED