Compound protects against cell damage that leads to macular degeneration

For macular degeneration patients, blurry vision emerges slowly as cells in and around the retina get damaged. Now, University of Florida Health researchers have found that a chemical compound improves eyesight in mice with macular degeneration and helps to protect human retinal cells.

The compound produced an antioxidant effect on human retinal cells, protecting them against the cell-damaging effect that occurs when oxygen is metabolized. In mouse models, the compound produced sharper vision and preserved the structure of support cells that are crucial to eyesight, researchers found. 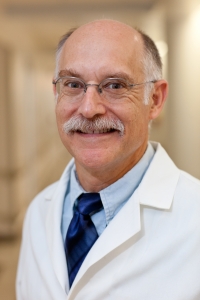 Those findings suggest that the drug, and others like it, could be useful in preventing so-called “dry” macular degeneration, according to Alfred S. Lewin, Ph.D., a professor in the UF College of Medicine department of molecular genetics and microbiology and a faculty member of the UF Genetic Institute. The results were published recently in the journal Experimental Eye Research.

There is no current treatment for the “dry” form of macular degeneration, a disease of the retina that causes blurry central vision and sometimes leads to blindness. It accounts for up to 90 percent of the 15 million cases of age-related macular degeneration in the United States, according to the Macular Degeneration Partnership.

During initial testing on human retinal pigment epithelium cells, the compound known as 8-OH-DPAT induced a suite of enzymes that provided protection against damage from oxidation, researchers found. Cell survival improved from 10 percent to about 65 percent when increasingly larger doses of the chemical were used.

Healthy retinal pigment cells are especially important in preventing dry macular degeneration because they help to support light-sensitive photoreceptor cells that are critical for vision.

The chemical appears to protect both the retina and its supporting epithelium cells by boosting the production of antioxidant and detoxification proteins, researchers found.

“The most important thing is that there is a class of drugs that may protect against a disease that affects 6 percent of the people over age 50, and a large number of people in Florida. Among this class of drugs, we may be able to find a tolerable dose that slows down retinal degeneration for people with dry macular degeneration ,” Lewin said.

Now, researchers are studying an oral form of a similar drug that provides the same protective benefits to the retina and surrounding tissue, Lewin said. That drug could be tested in humans relatively soon because it has already undergone a large clinical trial, he added.

Research funding was supplied by grant M2012019 from the BrightFocus Foundation and an Alcon Laboratories Inc. grant. Other support was provided by the Shaler Richardson Professorship endowment and National Eye Institute core grant P30 EY02172.

Doug Bennett joined the UF Health staff in January 2015 as a science writer and editor. His topic areas include anatomy; biochemistry and molecular biology; molecular genetics and microbiology; pathology,... END_OF_DOCUMENT_TOKEN_TO_BE_REPLACED