UF Health to resume elective surgeries, procedures on Monday, May 4. For more information on our ongoing response to COVID-19 in Gainesville, Jacksonville and Central Florida, visit our coronavirus website. END_OF_DOCUMENT_TOKEN_TO_BE_REPLACED

At 3:15 in the morning, almost one year ago to the day, Catherine Flanigan woke up and asked her husband for assistance in going to the bathroom. Her speech was slurred, but her husband thought it was because she had just awakened. It had been a rough few days, as she had just had a cholecystectomy. Quickly, however, her slurred speech became nonsensical mumbling, and she was no longer in control of the right side of her body. By the time the ambulance arrived, Catherine was no longer responsive, and was paralyzed on the right side. She was transported to UF Health, where Michael Waters, Ph.D., M.D., director of the UF Health Shands Comprehensive Stroke Center and chief of the vascular neurology division in the department of neurology, was awaiting, along with the acute stroke team, for her arrival. Brian Hoh, M.D., the James and Newton Eblen professor of neurosurgery, radiology and neuroscience and chief of the division of cerebrovascular surgery, was also at the ready. 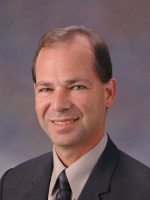 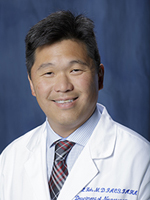 The stroke team was anticipating Catherine’s arrival thanks to UF Health’s pre-hospital alert policy for all suspected stroke victims in participation with Emergency Medical Services’ pre-hospital professionals. Her status on arrival was unchanged. Moreover, because she had fallen asleep at 10 p.m. the night before, there was no way to determine exactly when the stroke occurred. The window for administration of the “clot-buster” tissue Plasminogen Activator, also known as t-PA, is three hours from when the stroke occurred (four-and-a-half hours in more advanced centers such as UF Health), but she had already been asleep for over five hours. Worse still, the fact that she had had a cholecystectomy in the past 72 hours also made systemic administration of t-PA extremely risky.

This newsletter is the story of the amazing progress that has been made in the evaluation and treatment of stroke, and the success of our stroke team in making medical miracles happen for patients with stroke in this region. UF Health Shands is among a select group of 2 percent of hospitals in the nation who have earned the designation of Comprehensive Stroke Center from the Joint Commission.

Stroke, also known as a cerebrovascular accident or “brain attack,” is a syndrome caused by a disruption in the flow of blood to part of the brain due to occlusion of a blood vessel (ischemic stroke, about 85 percent) or rupture of a blood vessel (hemorrhagic stroke, about 15 percent). The interruption in blood flow deprives the brain of nutrients and oxygen, resulting in injury to cells in the affected vascular territory of the brain. When brain cells die, the function of the body parts they control is impaired or lost.

Stroke is a leading cause of death and disability. According to statistics from the Centers for Disease Control and Prevention (cdc.gov), about 800,000 people in the U.S. have a stroke each year, and stroke kills almost 130,000 Americans each year — accounting for one out of every 20 deaths. On average, one American dies from stroke every four minutes. Among those who have survived a stroke, 20 percent need help walking, 70 percent cannot return to their previous jobs and 50 percent are unable to return to work. It is the No. 1 cause of adult disability in the United States.

A key turning point in stroke therapy occurred in 1995 with the publication of the National Institutes of Health’s National Institute of Neurological Disorders and Stroke (NINDS) randomized trial of intravenous thrombolysis with t-PA, which demonstrated significant benefit in the treatment of acute stroke. Indeed, when the FDA approved t-PA in 1996 on the basis of this study, it was the first drug approved to treat acute ischemic stroke. t-PA is given intravenously to dissolve the clot or clots that are keeping blood from flowing to the brain. It improves the chance of recovery by up to 30 percent when used correctly. But there are two major limitations — the need to begin the treatment within four-and-a-half hours of the stroke, and the risk of intracranial or systemic bleeding.

Since the introduction of t-PA, two other important developments occurred in the evaluation and treatment of stroke. One involves neuroimaging. At UF Health, our stroke team uses the sophistication of a 320-slice CT scanner that produces images of real-time physiology of the entire brain. Though time of onset remains a critical determinant in stroke triage and treatment decisions, advanced stroke imaging can show vascular occlusions, compensatory collateral blood flow and hemodynamic conditions that allows stroke specialists to determine whether salvageable brain tissue remains, irrespective of time of onset. Catherine’s imaging told Drs. Waters and Hoh unequivocally that her brain was still alive — it just wasn’t receiving the blood it needed because of a clot in a major artery.

The other major advance in stroke treatment has been the development of mechanical devices that can remove blood clots within brain arteries (a procedure called “endovascular thrombectomy”). At UF Health, we have been at the forefront in these procedures for more than a decade. While some of the early mechanical endovascular devices did not show evidence of significant benefit in randomized controlled trials, refinement of the clinical protocols, in conjunction with advances in the engineering of the devices, have resulted in improved patient outcomes. Our team has been at the vanguard in developing better techniques, improved patient selection and superior technologies.

This journey, taken step-by-step by experts involved in acute stroke care nationally and internationally, culminated in the recent publication of five clinical trials validating endovascular intervention as a clearly superior treatment for patients with blood clots blocking large arteries in the brain. All five studies were published in The New England Journal of Medicine in the spring of 2014 and now define this technology as standard of care as articulated in recent guidelines. The 2015 Guidelines on Acute Stroke Care of the American Heart Association/American Stroke Association, which included Dr. Hoh as one of the experts on the panel of authors, now clearly state that eligible acute stroke patients should receive mechanical thrombectomy.

At UF Health, we were ready for Catherine. She was in the right place. An emergency CT scan was consistent with an ischemic stroke, showing occlusion of her middle cerebral artery. She was immediately transported to the interventional neuroangiography suite, where Dr. Hoh performed an endovascular mechanical thrombectomy, removing a blood clot from her middle cerebral artery and restoring blood to her starving brain. Her recovery is the story of what makes all of the work worthwhile. By the next morning, Catherine had full strength in her right arm and leg and was walking around her hospital room. Her NIH stroke scale had gone from a 19 (very severe) to a 1, with nearly imperceptible hesitation on speaking. On the third day she was discharged home with an NIH stroke scale of 0, her previous baseline.

UF Health has focused its resources and personnel on building the team and facility that will continue to provide state-of-the-art stroke care as information and technology evolves, and add to the knowledge in this inspirational field. With a dedicated multidisciplinary team that includes vascular neurologists, endovascular neurosurgeons, neuroradiologists, emergency department physicians, neurocritical care physicians and a dedicated group of professionals in nursing, laboratory medicine, imaging technologists, pharmacists and rehabilitation personnel, we have world-class care right here in our own backyard. Catherine is now enjoying retirement with her husband and is busy playing with her grandkids most days. See Catherine’s story in her own words at: http://stroke.ufhealth.org/2015/05/01/remarkable-results-after-stroke/.