Published: May 7, 2015 By: Dahlia Ghabour Category: University of Florida, College of Medicine 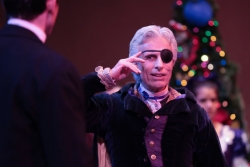 He’s a doctor by trade, not a dancer. But that doesn’t mean he can’t do both.

Anthony Mancuso, M.D., is a neuroradiologist at UF Health and a professor of otolaryngology and head and neck surgery in the College of Medicine. He has been chair of the department since 2001 and bounces between medical procedures and administrative work.

In his spare time, he’s on his feet in a dance studio.

“It’s so different from my day that immediately you’re out, you’re into another world, so it’s a little bit meditative,” Mancuso said. “Philosophically, where’s the time? You just make it.”

Mancuso said ballet encompassed several of his favorite things: staying fit, being part of a team and spending time with his family. The radiologist began dancing in the 1980s by taking ballet classes with his wife. Even after stopping for a while to nurse an injured knee, he continued to donate to the local troupe, Dance Alive National Ballet.

So when his twins, Marianna and Victor, expressed interest in being in The Nutcracker six years ago, Mancuso knew exactly where to take them. Then, when a dancer who played the role of Uncle Drosselmeyer couldn’t perform, the studio asked Mancuso to fill in. The rest is history.

“Their tradition of the professionalism they brought here and their own artistic integrity really deserves support,” he said of Dance Alive’s work. “So of course I contribute to them. I get to hang out with my kids and every now and then get a performance of The Nutcracker.”

The Mancuso family has performed together for five years now. They start rehearsals in September and touring starts in early December. For them, The Nutcracker has become more than a Christmas tradition.

After the Saturday matinee of The Nutcracker on Dec. 20, the stage was cleared and set up with tables for the Chocolate and Champagne Holiday Gala. Professional dancers paired up with local “celebrities” for a mock “Dancing with the Stars” competition. Mancuso was paired with Gretl Batista, a professional dancer who trained with the Cuban ballet. They won Judge’s Choice with a choreographed salsa dance.

“It’s just fun,” Mancuso said. “I like the form. I like the cause. I think between the contestants, there’s a camaraderie, it’s not really competitive. It’s for a good cause.”

Mancuso believes wholeheartedly in giving back to the community when financially possible, and he’s found multiple ways to do so. In addition to his work with the Dance Alive National Ballet, he has donated 40 acres of land for use by Horses Helping People. Horses there are used as therapy animals to aid children with special needs and veterans with post-traumatic stress disorder.

“Taking care of patients is one of the highest forms of human giving, and some would say that the performing arts are another high form of human expression,” Mancuso said. “We’ve had an Arts in Medicine program here for 25 years. If you have the opportunity to do that and be a doctor too, that’s pretty cool.”