UF Health to resume elective surgeries, procedures on Monday, May 4. For more information on our ongoing response to COVID-19 in Gainesville, Jacksonville and Central Florida, visit our coronavirus website. END_OF_DOCUMENT_TOKEN_TO_BE_REPLACED

Morey appointed chair of the UF department of anesthesiology 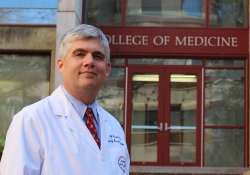 After an extensive national search, Timothy E. Morey, M.D., has been appointed chair of the anesthesiology department at the University of Florida College of Medicine.

“We were fortunate to have a person like Dr. Morey who possesses all of the traits that we seek in a department chair,” said Michael Good, dean of the UF College of Medicine. “He is well-respected at UF and nationally as a clinical anesthesiologist, a professor, a scientist, a mentor, an entrepreneur and a leader. He has served the department extremely effectively during the search. I am particular pleased with his vision to establish the department as a national leader in anesthesia care, education, and research.”

Morey will oversee a department that comprises nearly 70 clinical faculty, 20 active research faculty, 84 residents, 15 fellows, 50 certified registered nurse anesthetists and anesthesiology assistants, and a support and administrative staff approaching 40. Despite its current large size, Morey will immediately begin recruiting over a dozen faculty to care for the ever-increasing number of patients undergoing procedures by UF College of Medicine surgeons and other specialists. He will also work to better organize the department’s interprofessional health care teams, and modernize the departmental organization, clinical service agreements, and faculty processes.

“Dr Morey is a tireless advocate for our patients and high quality patient care,” noted Edward Jimenez, interim Chief Executive Officer for UF Health Shands. “We are thrilled to have him join the leadership team of the health system as chair of anesthesiology, a department that is critically important to clinical operations and the care of our surgical patients.”

“This is an exciting time in the department,” Morey said. “I look forward to working collaboratively with my colleagues within the department and with other departments and colleges to fulfill our missions of education, research and patient care.”

Morey is the co-author of more than 100 peer-reviewed papers, invited papers and book chapters.  He served as associate chair of the department and chair of the department’s research committee from 2005-2013, and oversaw a period of growth in NIH research funding from $373,452 in 2006 to $1.36 million in 2013. He is also the co-founder to four medical businesses, including NanoMedex Pharmaceuticals based in Madison, Wisconsin; Xhale Smart based in Gainesville; Hygreen Inc. based in Gainesville and Xhale Assurance based in Glastonbury, Connecticut.

His research interests include measuring medication adherence using exhaled breath; finding alternative formulations for propofol, a potent short-term anesthetic often used in surgery; employing exhaled propofol concentrations to understand anesthetic depth; and exploring unique locations for measuring blood oxygen levels in patients with low blood flow. Some of this technology has been transferred for development and commercialization to Xhale, one of the faculty companies headquartered in Gainesville.

Morey, who has served as interim chair of the department since 2013, began his career with the university as an undergraduate student, earning a bachelor’s degree with high honors in interdisciplinary basic biological science and medical sciences from the College of Liberal Arts and Sciences in 1989. He received his M.D. from the UF College of Medicine in 1992 and was a resident physician in anesthesiology from 1992-1996. Since that time, he has held positions of increasing responsibility within the department, most recently interim chair of the department and chair of the medical staff for the department. In addition, Morey has been a member of the UF Particle Engineering Research Center since 2003 and has collaborated extensively with faculty in the Colleges of Engineering and Liberal Arts and Sciences.

Director of News and Publications for UF Health. Before joining UF Health staff in 2012, she was the senior director of academic communications for the University of Arkansas. She has 20 years... END_OF_DOCUMENT_TOKEN_TO_BE_REPLACED