The best way to prevent the spread of COVID-19 is to get vaccinated. You can get a vaccine in many places in your community. Find a walk-up location or schedule an appointment today. END_OF_DOCUMENT_TOKEN_TO_BE_REPLACED

Paper points to most effective vaccine trials for epidemics, including Ebola 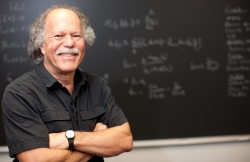 Implementing a vaccine trial during an epidemic can be difficult, particularly in countries with poor transportation, limited vaccine supplies and difficulty predicting how widespread a disease may become — conditions such as those in West Africa during the recent Ebola outbreak.

Now, a University of Florida Health researcher with colleagues from several other academic institutions have outlined three principles for these studies in a Perspectives paper published today, April 2, in the journal Science.

The paper outlines three methods for deploying vaccine trials in emergency situations for infectious diseases such as Ebola, cholera, meningococcal meningitis, Middle East respiratory syndrome, dengue fever, chikungunya and new strains of flu. Vaccines have the potential to prevent people from contracting these diseases, stopping the spread of infection.

“This discussion began back in October when different vaccine trial designs were being debated in the World Health Organization and a vaccine trial system was being set up. At that time, the Ebola epidemic was peaking,” said Ira Longini, Ph.D., a co-author of the article and co-director of the Center for Statistics and Quantitative Infectious Diseases in the Emerging Pathogens Institute at UF. “This was an effort to try to get these vaccines through phase 1 and 2 testing for safety and into the field for efficacy on a very accelerated basis. It typically takes months, if not years, to design these trials.”

Longini, a professor in the UF College of Public Health and Health Professions and the College of Medicine, said the article is an attempt to understand and clarify some of the possible trial designs. Longini is currently in Geneva, helping design vaccine trials.

The article first discusses a principle called “block randomization” within different districts that may be afflicted with the disease. Researchers would identify a group of people at each district who have a similar risk of exposure to Ebola infection during a specific period of time. Within each group, people would be randomly given an Ebola vaccine or a control, and at the conclusion of the trial, each center’s results would be combined to determine the trial’s overall outcome.

A second approach, called a stepped rollout, takes advantage of centers that might be ready to begin trials at different times because of vaccine availability, identification of centers and trial participants, information systems and personnel. In contrast, a standard trial, called an individually randomized controlled trial, would typically wait until each center is ready to start. But in the case of Ebola or other infectious disease, the disease may move too quickly to wait for each center to be ready to administer vaccines.

The final suggested option is adaptive design, which allows centers to be added to a vaccine trial when it becomes apparent they might be vulnerable to the spread of disease.

Currently, an Ebola vaccine trial in Guinea, the only phase 3 vaccine efficacy trial underway, uses a different approach: ring vaccination, according to the paper. In ring vaccination, people in contact with those who have contracted Ebola are vaccinated, as well as geographic neighbors of confirmed cases.

One of the vaccines being tested is a live attenuated, replicating vaccine, which means the virus is alive and in this case, hosted in a cow virus called vesicular stomatitis virus. The virus, which is harmless in humans, contains Ebola antibody genes, for which the human immune system can then prepare a defense. According to the Centers for Disease Control and Prevention, live attenuated vaccines offer stronger protection against disease than inactivated vaccines, which contain viruses that have been deactivated by heat or chemicals.

“Although the paper is only about estimating efficacy of these trials, not about controlling Ebola, I think an important take-home message is that it’s extremely important to have an Ebola vaccine,” Longini said. “Vaccine trials and the trial currently being conducted in the field will be able to determine the most effective targeted way to use vaccines in these challenging situations.”

Science writer for UF Health. Morgan writes about the research of faculty physicians in the College of Medicine. She joined the UF Health staff in 2014. A Michigan native, she... END_OF_DOCUMENT_TOKEN_TO_BE_REPLACED