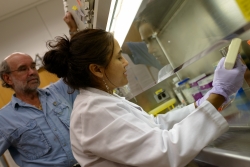 University of Florida Health researchers have discovered that a rabbit virus can deliver a one-two punch, killing some kinds of cancer cells while eliminating a common and dangerous complication of bone marrow transplants.

For patients with blood cancers such as leukemia and multiple myeloma, a bone marrow transplant can be both curative and perilous. It replenishes marrow lost to disease or chemotherapy but raises the risk that newly transplanted white blood cells will attack the recipient’s body.

Now researchers say the myxoma virus, found in rabbits, can do double duty, quelling the unwanted side effects of a bone marrow transplant and destroying cancer cells.

The virus could be especially helpful to patients who have recurring cancer but cannot find a suitable bone marrow donor, said Christopher R. Cogle, M.D., the study’s lead investigator and an associate professor in the UF College of Medicine’s division of hematology and oncology. Bone marrow transplants from partially matched donors carry about an 80 percent risk of graft-versus-host disease, and the myxoma treatment would address that, Cogle said.

The myxoma virus also could improve bone marrow transplant options among African-Americans and the elderly. Those patients are less likely to find fully matched bone marrow donors, which raises the risk of graft-versus-host disease, according to Cogle.

“Myxoma is one of the best strategies because it is effective but doesn’t affect normal stem cells,” he said.

During laboratory testing on human cells, the process worked this way: The myxoma virus is attached to a type of white blood cell known as a T-cell. The virus-laden white blood cells can then be delivered as part of a bone marrow transplant from a donor. That’s when the virus gets activated and goes to work. It blocks graft-versus-host disease, a complication of bone marrow transplants that can cause problems including skin rash, shortness of breath, abdominal pain, jaundice and muscle weakness. In severe cases, these complications can be fatal. The white blood cells then deliver the myxoma virus to cancer cells, which are killed off by the virus.

The findings were published in the April 22 edition of the journal Blood. After successfully testing the process with human cells, researchers are now studying its effectiveness in a mouse model.

The dual action of the myxoma virus is particularly encouraging, said Grant McFadden, Ph.D., a professor in the UF College of Medicine department of molecular genetics and microbiology. It’s the first time that a virus has been shown to simultaneously prevent graft-versus-host disease and kill cancer cells in the laboratory, McFadden said.

The process is known to work on blood-related disorders such as multiple myeloma and acute myeloid leukemia but could someday have broader application for other kinds of cancer, he said. The myxoma virus originates among rabbits in Australia and parts of Europe and is benign to humans.

The discovery might never have happened if not for a chance meeting at a coffee kiosk on the health campus. Cogle and McFadden introduced themselves to each other, which led to a collaboration that has lasted seven years.

“It’s one of the benefits of a health research campus like UF,” Cogle said. “His virus killed the cancer cells that I grew in my lab and spared normal blood stem cells.”

Another crucial part of the research team’s work was done by Nancy Villa, Ph.D., a research scientist in the division of hematology and oncology. Villa’s findings were crucial to understanding and explaining how myxoma prevents graft-versus-host disease, Cogle said. McFadden credits Villa for finding a way to explain to other scientists how the virus-laden white blood cells can prevent graft-versus-host disease and still be an effective killer of cancer cells. That knowledge will be crucial as the team presses on with its research, McFadden said.

After the initial success with human cells, McFadden is cautiously optimistic that a clinical trial could begin within a year. Before that, researchers need to develop a clinical-grade virus, do safety testing and raise about $1 million for clinical trials. The UF-owned patent on the myxoma process has been licensed to a Houston-based company, which will seek to raise money for clinical trials, Cogle said.

The research was supported by grants of $1.5 million each from the Florida Bankhead-Coley Cancer Research Program and the National Institutes of Health/National Cancer Institute. Additional financial support came from the Gatorade Trust, which is administered by the department of medicine and the UF Research Foundation.

Doug Bennett joined the UF Health staff in January 2015 as a science writer and editor. His topic areas include anatomy; biochemistry and molecular biology; molecular genetics and microbiology; pathology,... END_OF_DOCUMENT_TOKEN_TO_BE_REPLACED