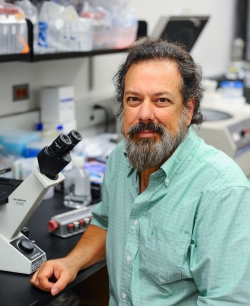 The milk-heating process known as pasteurization is routinely used in the United States to kill bacteria in dairy products. Its use has eliminated — or kept at bay — many diseases, including a devastating condition known as brucellosis, which affects both livestock and people.

But in many other countries, particularly those where people live with and are dependent on livestock for survival, pasteurization is not routine and the incidence of brucellosis — which is caused most commonly by eating or drinking unpasteurized dairy products — is much higher, said David Pascual, Ph.D., a professor of mucosal immunology at the University of Florida’s College of Veterinary Medicine.

Pascual and his colleagues are now developing and testing vaccine varieties in cattle with the hope that humans will ultimately benefit as well.

According to the Centers for Disease Control and Prevention, people most commonly become infected with brucellosis, which causes flu-like symptoms and malaise, by eating or drinking unpasteurized dairy products. Cattle primarily become infected through nasal or oral exposure, as well as through sexual transmission, Pascual said.

“Brucellosis is a global disease,” he said. “This is not a disease with overt symptoms, yet it has been around as long as humans. New infections are occurring at a rate of about half a million people per year, which is believed to be nearly 25-fold underestimated.

“The outcomes of our various studies may give us some idea how the vaccines will work in humans.”

In the U.S., infections in humans, when they do occur, are usually seen in veterinarians or ranchers who manage livestock or inadvertently inject themselves with a live vaccine. But Pascual points out that in the area near Yellowstone National Park that encompasses portions of Montana, Idaho and Wyoming, roughly half of the bison are infected with the disease. Moreover, about 60 percent of the elk in that area have been exposed to this pathogen, Pascual said. He added that in addition to dealing with the disease, ranchers and communities are affected by the cost of managing it.

“While there is a vaccine for livestock, it’s only about 70 percent effective, even after revaccination,” he said. “Furthermore, in humans, there is no brucellosis vaccine. The disease causes flu-like symptoms and malaise. Even if you can diagnose the disease early and implement antibiotic treatment, there is no guarantee you’ll be able to eradicate the infection. Since it’s a relapsing infection, one day an infected person might feel fine and the next, they can’t get out of bed.”

“We hope to identify several vaccine candidates,” he said. “Then we will test each in cows to see if they’ll work.”

Because the primary routes of infection in both people and cows are oral and nasal, people put themselves at risk by eating non-pasteurized dairy products. The vaccines are being developed as oral or nasal applications, eliminating needles involved in their administration.

Working closely with Pascual on different aspects of his mucosal immunology research are two scientists who have been with his laboratory for many years, moving with him to UF in 2012 from Montana State University in Bozeman, and a graduate student.

Pascual looks forward to an even greater synergy in immunology research when one of the college’s new eminent hires, Dr. Roy Curtiss, comes on board later this year.

Sarah Carey, M.A., A.P.R., is director of public relations at the University of Florida College of Veterinary Medicine, a job she has held since 1990. Formerly, she was editor of... END_OF_DOCUMENT_TOKEN_TO_BE_REPLACED