UF Health to resume elective surgeries, procedures on Monday, May 4. For more information on our ongoing response to COVID-19 in Gainesville, Jacksonville and Central Florida, visit our coronavirus website. END_OF_DOCUMENT_TOKEN_TO_BE_REPLACED

A teacher of all trades

Published: May 7, 2015 By: Dorothy Hagmajer Category: University of Florida, College of Dentistry 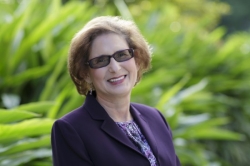 For decades, Linda Behar-Horenstein has been a master teacher. Now she is helping College of Dentistry faculty become better teachers and critical thinkers.

Linda Behar-Horenstein, Ph.D, is the queen of critical thinking.

Before her reign within UF’s colleges of Dentistry and Education began, Behar-Horenstein’s keen eye for detail first served her in her years as professional musician — she was an alternate oboe player in the Civic Orchestra of Chicago. In graduate school, she taught music to 23 students every week.

“I made their reeds from scratch,” Behar-Horenstein said. “Out of tube cane.”

Her students had the best reeds.

After obtaining her bachelor’s in psychology and her master’s in guidance counseling, Behar-Horenstein worked at a school for emotionally and behaviorally disordered children, giving private music lessons on the side. One day, someone asked her what she planned to do with her life.

“He said, ‘Go do something with yourself,’” Behar-Horenstein said. “’Get a doctorate, or something.’ So I did.”

Behar-Horenstein enrolled in Loyola University, where she endeavored to study curriculum. But in order to study it at the doctoral level, she needed a teaching degree — so she found herself at an after-school program for one of the Catholic schools in the area. For her mandatory student teaching, she needed to complete what seemed to be an almost impossible task — teach seventh-grade boys about opera. But Behar-Horenstein was not deterred.

“The supervisor came in and saw that the boys were clearly extremely engaged in opera and couldn’t figure out what it was (I was doing),” Behar-Horenstein said with a laugh.

“It” turned out to be football.

“I was going through history and talking about opera, and I said it was just like football,” Behar-Horenstein said. “Opera is only as good as the last-string quarterback. Same idea. It’s a team thing.”

Since then, Behar-Horenstein has taken her teaching talents to both the College of Education and College of Dentistry. While Behar-Horenstein is something of an expert on pedagogy, the practice of teaching, nowadays she finds that she spends most of her time at the College of Dentistry. Her relationship with the dental school began when the former dean asked her to determine the degree to which critical thinking skills were being emphasized and promoted in the college’s clinics.

“I did 44 observations over a period of five weeks,” Behar-Horenstein said. “It was the beginning of everything — of a study that was a qualitative study, and the first qualitative research article in the Journal of Dental Education.”

“You don’t teach someone to think critically. You show them the strategies they can use that will promote their ability to become a critical thinker,” Behar-Horenstein said.

“At this point in my career, I wake up on Sundays and can’t wait to go to work,” she said.