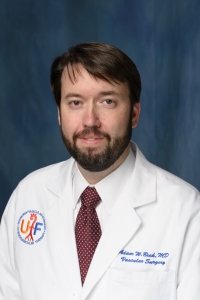 A surgeon at University of Florida Health is currently the only researcher in the nation conducting a study of three specific, unique types of devices to treat aortic aneurysms.

Adam Beck, M.D., a UF Health vascular surgeon and an assistant professor in the UF College of Medicine’s department of surgery, is the study’s lead investigator and has permission from the Food and Drug Administration to use a surgeon-modified device and two others it considers “investigational,” meaning they have not yet been approved for use in the United States.

Also called grafts, these metal mesh tubes are covered with a special fabric and are used to line the inside of a major blood vessel where there is a weak spot, known as an aneurysm. Blood collects in the weak area, causing it to balloon outward and sometimes rupture, which can be fatal.

Without the use of these specialized grafts, repair of aortic aneurysms in this area of the body requires extensive open surgery. Such surgeries have a high rate of complications, so many patients are not candidates for them and may have no other options for repair.

“With these advances in minimally invasive procedures, the majority of patients with thoracoabdominal aortic aneurysms will eventually be treated with this approach,” Beck said.

Aortic aneurysms were the primary cause of 9,797 deaths in the U.S. in 2012, according to data from a National Vital Statistics Report. The UF Health study focuses on treatment of aneurysms close to and above the kidney arteries as well as thoracoabdominal aortic aneurysms, which occur above the superior mesenteric artery. This artery is located near the kidneys and provides blood flow to the intestines.

Aortic aneurysms in this area represent an especially complex problem because of their proximity to major vessels that arise from the aorta to feed the kidneys, intestines and liver. Unlike aneurysms that are isolated to the chest, the standard of treatment for thoracoabdominal aortic aneurysms requires open surgery because of the difficulties associated with maintaining blood flow to organ vessels.

Endovascular grafts, the kind used in this study, are inserted via a catheter through the arteries in the groin. The grafts are then fed through the vascular system to the diseased portion of the aorta. The grafts covered by this study also have openings, called fenestrations, and branches to allow blood to flow freely into vessels that branch off from the aorta. Smaller grafts are used to connect the branched/fenestrated graft to the aortic branch vessels. This prevents the graft from cutting off circulation to nearby organs. Once inside the aorta, the surgeon opens the device with the holes and branches in the correct locations, as determined by marks on the graft visible through X-ray and specialized 3-D imaging. The smaller grafts are then inserted separately and used to connect the main device to the branch vessels. Once completed, the devices essentially reline the diseased portion of the aorta, protecting the patient from aneurysm rupture.

One of the investigational devices that Beck uses in this study is a custom product, created specifically for each patient, based on scans that show the vascular system in detail.

The other graft is an off-the-shelf device with four branches. It is used in this trial for patients whose aneurysms require more immediate attention than custom graft creation allows.

“The two devices,” Beck noted, “have been used to treat thousands of patients around the world outside the U.S. and within other, similar studies in the U.S., but are not widely available in this country outside of trials like this one. The outcomes and durability, as published in the literature, are very good.”

Some patients have unusual anatomy requiring a custom graft, but cannot wait for a custom, pre-made graft from the manufacturer. In these cases, Beck creates a graft in the operating room using devices for the treatment of other types of aneurysms by modifying them with openings and branches. These surgeon-modified devices are the third type covered in the study.

Beck trained in the use of branched and fenestrated grafts during two different fellowships. He has extensive experience at UF Health using similar devices in other parts of the aorta. In early October, he performed the first operation under the new study, implanting a custom graft in a patient with a thoracoabdominal aortic aneurysm.