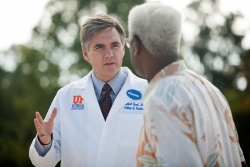 A delegation of medical school officials from the University of Florida will travel to Poland in October as part of an initiative to promote innovation through U.S.-Polish ventures and joint research projects.

Michael L. Good, M.D., dean of the UF College of Medicine, and five faculty members will begin their visit at the University of Rzeszow, where Good will participate in the opening of its new medical school by giving the inaugural lecture Oct. 6.

Gainesville and Rzeszow formed a sister city partnership in 2013. Rzeszow, a city of 180,000 and some 60,000 college students, shares many similarities with Gainesville. Representatives from the two municipalities are working to link their academic institutions, industry and governments to help spur economic growth.

The delegation will also include representatives from the Polish-American Chamber of Commerce of Eastern USA, a partnership of businesses and professionals who facilitate business development between Poland and the United States. The October trip will focus on identifying opportunities for collaboration in selected areas of biomedical research and information technology applications.

“Our goal is to facilitate communication among scientists at UF Health and in Poland who share research interests,” Good said. “We want to foster collaborative research that will attract funding and strengthen our communities’ economies and ultimately enhance health.”

Good will meet with leaders from Poland’s National Centre for Research and Development, or NCBR, a national funding agency similar to the National Science Foundation, as well as with presidents of several Polish universities. He and the others return to the United States Oct. 10.

UF faculty from the departments of neuroscience, orthopaedics and rehabilitation and neurosurgery will attend medical conferences and meet with their Polish counterparts. They are looking to open doors to funding opportunities from both the United States and Poland, including from the European Union through Poland’s NCBR and the US-Poland Innovation Program, or PLUS-IP, which launched last November.

PLUS-IP is a collaborative initiative between the U.S. State Department and the Ministry of Science and Higher Education of the Republic of Poland. Through PLUS-IP, the Polish government plans to establish several 10-year venture capital funds to finance worthy projects. Sectors of emphasis include energy, health, science, technology and defense.

“We are optimistic that the visit by the University of Florida medical/scientific delegation to Poland will lead to innovative advancements by creating synergies that will help reduce the costs and increase the availability of medical care for patients,” said Alachua County Judge Thomas M. Jaworski, president of the Polish-American Chamber of Commerce of Eastern USA.

As part of the sister city program, a 10-person delegation from Rzeszow visited Gainesville in September 2014 during the Polish Week of Business and Culture. The mayor of Rzeszow and others from the delegation met with numerous city and state representatives, including the mayor of Gainesville, the president of UF and the president of Santa Fe College, business leaders and members of local and international chambers of commerce.

“It is so exciting to see this Sister City relationship bearing fruit,” said Gainesville Mayor Ed Braddy. “Establishing a presence in Eastern Europe through our partnership with Rzeszow will bring many benefits to the Gainesville Gator Nation.”

Director of Communications, College of Medicine