For more information on our ongoing response to COVID-19 in Gainesville, Jacksonville and Central Florida, visit our coronavirus website. END_OF_DOCUMENT_TOKEN_TO_BE_REPLACED

A new five-year, $7.15 million grant from the National Institutes of Health will support the University of Florida’s continued study of MRI to track Duchenne muscular dystrophy disease progression.

Duchenne muscular dystrophy affects about one of every 3,500 to 5,000 boys born each year in the United States, according to the Centers for Disease Control and Prevention, and the incidence worldwide is likely the same. The disease causes the muscles that control movement to progressively weaken and lose the ability to regenerate, eventually replacing muscle tissue with fat and scar tissue. Because of muscle loss, many patients need a wheelchair by age 12. 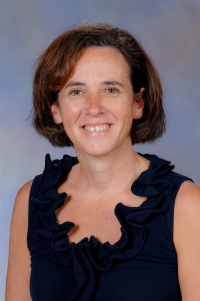 In a previous multisite study funded by a $7.5 million NIH grant, UF researchers demonstrated that MRI technology provides a precise, noninvasive measurement of diseased leg muscle tissue in boys with Duchenne. MRI has the potential to offer rapid feedback on the effects of new therapies in clinical trials, allowing scientists to detect muscle changes from therapeutic treatments in as little as a few months, said lead investigator Krista Vandenborne, Ph.D., P.T., a professor and chair of the department of physical therapy in the UF College of Public Health and Health Professions, part of UF Health.

“Rather than waiting a year or two years, we can now assess in a matter of months whether a treatment is working,” she said. “From a drug development standpoint and for helping to move the field forward, MRI has had an enormous impact. I think everyone in the Duchenne community is now convinced of the importance of MRI.”

For the new five-year study, Vandenborne, and Co-Director H. Lee Sweeney, Ph.D., the Thomas H. Maren, M.D., eminent scholar chair in pharmacology and therapeutics in the UF College of Medicine, and other team members — including researchers at The Children’s Hospital of Philadelphia, Oregon Health & Science University and Shriners Hospital for Children – Portland — will continue to follow Duchenne muscular dystrophy progression in the 136 boys who participated in the first imaging project. The researchers also will test the use of MRI for measurements of arm muscles. If measurements in the arm offer the same sensitivity and reliability as tests of leg muscles, they could greatly increase the number of boys with Duchenne who can participate in drug trials, which have been limited to boys who can still walk.

“An aim of the study is to develop MRI as a biomarker that can be used in non-ambulatory boys with the goal of expanding studies to be more inclusive,” said longstanding co-investigator Glenn Walter, Ph.D., a professor in the College of Medicine’s department of physiology and functional genomics. “This is obviously important from a clinical trial perspective, but it’s also extremely important from a parent’s perspective. You can imagine how hard it would be if your child is no longer eligible to participate in a clinical trial because he has lost the ability to walk a certain distance. Given the rapid rate of the disease progression, a child might be evaluated for a study today, but in six months may be no longer eligible.”

The new grant also supports the creation of a national tissue and data bank, giving scientists from other U.S. institutions and across the world insight into the disease progression of Duchenne muscular dystrophy. This will continue to facilitate the design of future clinical trials and help scientists pursue other pivotal research questions.

UF Health, which recently received designation as an NIH-supported Senator Paul D. Wellstone Muscular Dystrophy Cooperative Research Center directed by Sweeney, is home to a number of muscle biology and neuromuscular disease investigators who are conducting research across a broad spectrum, from the cellular level to drug development and testing in patients, Vandenborne said.

“Normally it takes many, many years to go from the bench or pre-clinical stage to human trials, but being here and working so closely together gives us the ability to translate research to patients very rapidly,” she said.

Jill Pease is the public relations director for the UF College of Public Health and Health Professions. She is responsible for developing public relations and communications strategies to promote the... END_OF_DOCUMENT_TOKEN_TO_BE_REPLACED