UF Health to resume elective surgeries, procedures on Monday, May 4. For more information on our ongoing response to COVID-19 in Gainesville, Jacksonville and Central Florida, visit our coronavirus website. END_OF_DOCUMENT_TOKEN_TO_BE_REPLACED

Tweet
Todd E. Golde, M.D., Ph.D., an internationally known expert in the scientific understanding of Alzheimer’s disease, has been appointed executive director of the Evelyn F. and William L. McKnight Brain Institute of the University of Florida. His appointment will be effective Dec. 1. 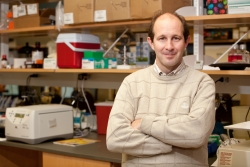 “We are very fortunate to have Dr. Golde lead the McKnight Brain Institute,” said David S. Guzick, M.D., Ph.D., UF senior vice president for health affairs and president of UF Health. “He is a world-class translational scientist and is committed to promoting collaborative neuroscience among an expanding base of research programs under the institute’s umbrella. Dr. Golde’s expertise will also stimulate cross-cutting investigation at the MBI, creating interfaces, for example, between basic, translational and clinical scientists who are supported by the McKnight Brain Research Foundation.”

Golde, currently a professor of neuroscience and director of UF’s Center for Translational Research in Neurodegenerative Disease and the 1Florida Alzheimer’s Disease Research Center consortium of institutions, has served the MBI for six years as both an investigator and a leader, pioneering programs to closely link basic-science laboratory work with patient-based studies to translate new discoveries into diagnoses and treatments.

“Dr. Golde stood out among the candidates as the person with a vision for bringing together the MBI to build on the current research and education programs, taking them to the next level,” said Thomas A. Pearson, M.D., M.P.H., Ph.D., UF Health executive vice president for research and education and the chair of the MBI director search committee.

Golde came to UF Health from the Mayo Clinic in Jacksonville, bringing a wealth of administrative and strategic-planning experience. As chair of Mayo’s department of neuroscience, he oversaw an extramural grant portfolio that exceeded $10 million a year.

An investigator into the study of Alzheimer’s disease for almost three decades, Golde has published more than 220 papers that have been cited more than 25,000 times. He has expanded his leading-edge research to include other neurodegenerative diseases, cancer and even malaria.

“In this new role, I hope to use these experiences to ensure that our broad neuroscience research and education programs flourish and are viewed as world-class,” Golde said. “My passion is to assemble multidisciplinary teams of physicians and scientists to conduct research into neurological disorders that could one day help change the current understanding of many of these diseases from being incurable, inevitable and largely untreatable to a new reality in which these disorders can be cured, prevented and treated.”

Nationally, Golde is a member of the medical and scientific advisory board for the Alzheimer’s Association and the BrightFocus Foundation. He also serves on several state advisory boards related to Alzheimer’s disease.

At the MBI, Golde will succeed Tetsuo Ashizawa, M.D., who is now director of the neurosciences research program at Houston Methodist Hospital.

Golde aims to align the vision and mission of the MBI, at a time when UF is preparing to open a new hospital devoted solely to neuromedicine in 2017.

“We’ve made a lot of investments in neuromedicine and neuroscience research at the Health Science Center over the last five years,” he said. “We have outstanding investigators, and I want to help them collaborate and find synergy and share resources so we can continue our growth in this area. Moving forward, we’d like more connections between research at the lab bench and care at the bedside.”

Michelle Koidin Jaffee is assistant director of communications for the McKnight Brain Institute of the University of Florida. In more than 20 years as a journalist, she worked as a... END_OF_DOCUMENT_TOKEN_TO_BE_REPLACED