UF Health to resume elective surgeries, procedures on Monday, May 4. For more information on our ongoing response to COVID-19 in Gainesville, Jacksonville and Central Florida, visit our coronavirus website. END_OF_DOCUMENT_TOKEN_TO_BE_REPLACED

As the mom of a young child with autism spectrum disorder, Jovon Howard is hesitant to step away even for a few minutes to take a shower or wash the dishes. Her daughter, 6-year-old Jaliyah, is as curious as any child and has figured out how to unlock doors. And because she is primarily nonverbal, Jaliyah won’t respond to being called.

“We’ve had a couple of major scares,” her mom said.

Now, a new state program aims to help families like Jaliyah’s, providing free, wristwatch-style GPS tracking devices to people who have autism spectrum disorder and are at risk for wandering. The state-funded pilot program, being launched by the Center for Autism and Related Disabilities at the University of Florida and two other centers, will cover the cost of the devices for participants as well as receivers for local sheriff’s offices.

In addition to the UF center, centers at Florida Atlantic University and the University of South Florida will provide devices to participants in the Palm Beach and Tampa areas.

The devices are being made available through state grants — $100,000 to each of the three centers — as a result of Senate Bill 230, which the Legislature passed this year. The law is aimed at improving personal safety for people with autism spectrum disorder by providing 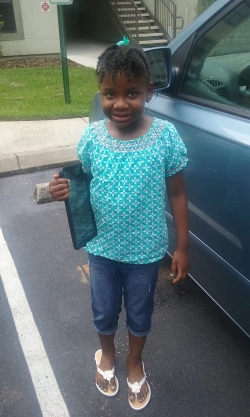 Known as Project Leo, the law was passed following the 2014 death of 9-year-old Leo Walker, a boy with autism spectrum disorder who wandered from his North Florida home and drowned in a nearby pond.

Under the program, 80 personal transmitters — which can be attached to clothing or worn around the wrist or ankle — will be available at the UF center and distributed to those who meet certain criteria, including risk of wandering and a diagnosis of autism spectrum disorder.

“It can save lives,” said Ann-Marie Orlando, Ph.D., a research assistant professor at UF’s Center for Autism and Related Disabilities. “We want children and families to be protected.”

The program is geared toward helping families who cannot afford such devices, which are available for purchase online and can be connected to receivers already in use by many sheriff’s offices, including the Alachua County Sheriff’s Office.

“Some families can afford them, but others can’t,” Orlando said. “The purpose is to help those who can’t do this on their own.”

Greg Valcante, Ph.D., director of UF’s center, wants to get the word out to parents who might be interested in participating in the pilot program. In the Gainesville region, residents of Alachua, Columbia, Suwannee, Hamilton and Baker counties may apply; those interested should contact Ana Vilfort Garces at the Center for Autism and Related Disabilities at 352-273-0581 or ana501@ufl.edu.

UF’s center is obtaining its transmitters from Project Lifesaver International, a Port St. Lucie-based nonprofit that sells electronics intended for people with cognitive disorders. According to Project Lifesaver, most people who wander are found within a few miles of home, and the use of tracking devices has cut search times from hours or days to minutes.

The three Florida centers will report back on the results of the pilot project by December 2017 and make recommendations to the governor and Legislature.

For Jovon Howard of Gainesville, word of the new program is great news. Her family had briefly used a tracking device with Jaliyah — a device that provided status updates to their smartphones — but it became too costly.

“Her wanting to get out is her natural curiosity as a child,” Howard said. “The problem is she doesn’t have a sense of danger. She’s just doing what kids naturally want to do.”

Michelle Koidin Jaffee is assistant director of communications for the McKnight Brain Institute of the University of Florida. In more than 20 years as a journalist, she worked as a... END_OF_DOCUMENT_TOKEN_TO_BE_REPLACED