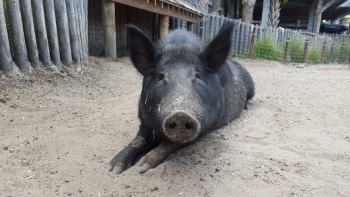 A 350-pound feral pig named Donny is home rolling in the mud at the Bass Pro Shops exhibit in Palm Bay after having emergency surgery March 29 at the University of Florida’s Large Animal Hospital to relieve a urinary blockage.

When Donny arrived at UF, he was met by members of UF’s large animal internal medicine team. Through ultrasound, blood work and the patient’s history, the team confirmed the referring veterinarian’s suspicion that Donny had a urinary blockage and recommended that abdominal surgery be performed immediately to save his life.

“He was acting painful and had been unable to urinate,” said Anje Bauck, D.V.M., a large-animal surgery senior resident. Bauck performed a tube cystotomy, a procedure that diverts urine away from the blocked urethra and allows it to drain from a catheter placed into the bladder.

The type of urinary blockage that Donny had, kidney stones, can result in a ruptured bladder, but that had not happened in his case, Bauck said.

“The kidney stones are often in the urethra and it is not always possible to remove these stones immediately,” she said.

The catheter provides a sort of temporary bypass, permitting the urethra to relax and the inflammation and swelling to decrease, allowing the stone to pass.

Donny remained at UF for a month, recuperating under close observation by veterinarians until they were convinced his blockage had been completely relieved and the catheter could be removed. He was discharged April 28 and given a week for his catheter incision to heal, before returning  on exhibit at Bass Pro Shops on May 5.

The availability of board-certified veterinary anesthesiologists who are experienced at administering anesthesia to pigs — a challenging task because of their anatomy — was key to UF’s ability to successfully treat Donny, Bauck said.

Tiffany Granone, D.V.M., was the faculty anesthesiologist who worked on Donny’s case.

“She is very knowledgeable about working with pigs, which are always challenging. Donny did really well, no complications,” Bauck said.Donny’s medical problem is common in pet goats and pet pigs. It often results from animals being fed improper diets, UF veterinarians said. Although Donny had been given a nutritionist-approved diet, his diet was supplemented with fresh vegetables including spinach and kale, which contain calcium. That may have been a factor in the development of his kidney stones.

“The proportions of mineral components in a pig’s diet are very important,” said Ali Morton, D.V.M., chief of the hospital’s large animal surgery service. “Donny’s caretakers were very knowledgeable in general, but problems often arise when non-farm animals consume food other than what is formulated for them, such as snacks or human foods. Unfortunately, there is also a lot of misinformation out there when it comes to pig diets. Also, like in people, we also suspect that there may be a heritable component to development of kidney stones.”

Despite his initial discomfort, Donny was a very well-behaved pig and a good patient to work with, especially for his size, Morton added.

“He has a great personality and the people at Bass Pro Shops have done a wonderful job training and handling him,” she said.

“Seeing the team jump into action with such skill, speed and care was truly impressive,” Daniel said.

Debbi Crain, Bass Pro Shops live exhibits manager, who is based at the corporate office in Springfield, Missouri, said the organization’s live exhibit division has worked with UF aquatics experts for years but that this was their first experience at the university’s Large Animal Hospital.

“It was obvious without that care, he would not have survived,” Crain said. “He does have a following at the store and was missed while he was gone.”

Sarah Carey, M.A., A.P.R., is director of public relations at the University of Florida College of Veterinary Medicine, a job she has held since 1990. Formerly, she was editor of... END_OF_DOCUMENT_TOKEN_TO_BE_REPLACED