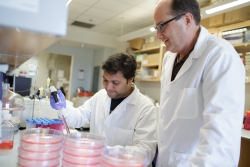 A UF Health researcher is studying a natural therapy for treating liver cancer, one of the leading causes of cancer-related deaths in the world.

Thomas Schmittgen, Ph.D., a professor of pharmaceutics in the University of Florida College of Pharmacy, is identifying novel treatments and new ways to deliver those therapies by restoring microRNA levels in cancer cells in hopes of finding options for people with the disease.

“There is really no effective treatment for liver cancer when it advances,” Schmittgen said. “In the early stages doctors can treat it with surgery or by directing chemotherapy to the liver. Once it starts to spread to other parts of the body, there are no good treatments. There is clearly a real need for developing new therapies.”

In a $3.2 million National Institutes of Health-funded study, Schmittgen and co-investigator Mitch Phelps, Ph.D., an associate professor of pharmaceutics and pharmaceutical chemistry at The Ohio State University, are attempting to restore the microRNA within cells to healthy levels. MicroRNA are tiny strands of molecules that serve as important gene regulators in the body. Liver cancers can form when certain microRNA molecules disappear from healthy cells. The challenge is that microRNAs are traditionally unstable in the bloodstream limiting the effectiveness of drug treatment options.

“If you consider MicroRNAs as drugs, they are very different from a traditional drug like Tylenol,” Schmittgen said. “They are much larger molecules and are rapidly destroyed in the bloodstream before reaching their intended target.”

The researchers are developing a novel drug delivery system involving exosomes, or extracellular RNA, to elevate microRNA levels in tumor cells. This type of RNA is believed to be a crucial link in cell-to-cell communication and can assist in the regulation of cell activity.

“What makes exosomes very attractive for drug delivery is that they are a very natural substance,” Schmittgen said. “They are already in our bodies, and they protect the microRNA from being degraded or destroyed in the bloodstream.”

Exosomes also have the attention of scientists because they can be engineered to target specific tissues. In Schmittgen’s study, researchers are growing cells in cultures and then modifying the cells to produce exosomes that will deliver the microRNA to liver tumors. Initial tests in mice have shown that the exosomes are not toxic, and Schmittgen hopes that further investigation could one day lead to a clinical trial of the exosome delivery model.

With microRNA and exosomes naturally occurring in the body, this therapy may present a more effective natural alternative to chemotherapy treatments. Liver cancers resist most chemo drugs, and effective drugs have been able to reduce only a small portion of tumors in the liver.

“From what we know about microRNAs, they do not appear to be toxic to the patient,” Schmittgen said. “The reason is that we are simply adding something back to the patient that was already there in the first place and lost.”

The NIH funded Schmittgen and Phelps’ study in two phases. In 2013, NIH provided $1.5 million to fund phase I of the research examining microRNA and exosomes. NIH recently committed the final $1.7 million to fund phase II, where the researchers will attempt to produce more exosomes and conduct additional tests related to the effectiveness of the liver cancer drugs. NIH funded the research through its Extracellular RNA Communication Common Fund program that supports scientists’ efforts to better understand how extracellular RNA research may improve the diagnosis, prognosis and treatment of a wide range of diseases, including liver cancer.

Schmittgen, who is also a member of the UF Health Cancer Center, joined the UF College of Pharmacy as a Preeminence initiative scholar in 2015. UF Preeminence aims to recruit top scientists to join UF and help the university become an international leader in more than two dozen fields, including cancer therapeutics and drug discovery and development.

Matt Splett is director of communications for the College of Pharmacy. He leads efforts to enhance the college’s brand image through traditional and new media initiatives and serves as executive... END_OF_DOCUMENT_TOKEN_TO_BE_REPLACED