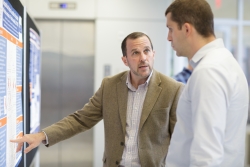 A group led by University of Florida Health researchers has a received a three-year, $600,000 federal grant that will help fight prescription drug abuse by making a statewide database more useful for physicians and more beneficial for patients.

The grant will be used to bring together an unprecedented multidisciplinary team of more than 30 clinicians, researchers and law enforcement officials to make Florida’s Prescription Drug Monitoring Program more effective and efficient at giving vital prescribing information to physicians, said Chris Delcher, Ph.D., an assistant professor in the UF College of Medicine’s department of health outcomes and policy and the lead investigator.

“We think the cumulative effect will be to help decrease inappropriate prescribing and ultimately prevent patients from having a problem with substance abuse,” he said.

One way that can happen is by making the program’s patient information more easily accessible to physicians by analyzing the data that is already in the system to generate indicators that will help physicians make faster, better prescribing decisions for patients, Delcher said.

While the PDMP was set up to help prevent so-called “doctor shopping” — obtaining multiple prescriptions for pain medications and other controlled substances — Florida’s medical community isn’t required to access this database. Currently, 53 percent of pharmacists and 19 percent of physicians statewide participate in the program. Delcher said more doctors and pharmacies would use the system if it was less time-consuming — something that the UF-led group hopes to address with their upcoming work.

Delcher said the program’s prescribing data can be better organized to give physicians a more accurate measure of how much morphine patients are receiving, even if they have visited multiple clinics in different parts of the state. Pain medication doses can be converted to a morphine equivalent, giving physicians a quick, standard measure of a patient’s morphine exposure. Having that information close at hand would help physicians make faster, better-informed decisions about high-risk prescribing that can lead to opioid abuse and drug overdoses.

“This project lets us get smarter about the kinds of prescribing that physicians are doing in Florida using the best available data and evidence,” Delcher said.

Florida has some momentum in drug-poisoning deaths, posting a 23 percent decline between 2010 and 2013, according to the U.S. Centers for Disease Control and Prevention. Still, there are challenges. Overdoses from the prescription pain medication oxycodone have declined since 2010, but the state has seen a spike in deaths from other opioids such as heroin and fentanyl.

Ultimately, Delcher said he hopes the group’s work will lead to more participation in the program by physicians who prescribe controlled substances, as well as a decrease in prescription drug overdose deaths and misuse of opioids. Dissemination of the project’s results through a newly established, statewide clinical research network, known as the OneFlorida Clinical Research Consortium, is planned.

The group also plans to collect information to help close a crucial loophole in state law. Currently, medical examiners have no access to a decedent’s prescription drug history. That makes drug-overdose investigations more difficult as investigators try to discern whether a fatal dose came from legal or illicit sources, said Bruce Goldberger, Ph.D., director of UF Health Forensic Medicine and a co-investigator on the current project. Through the grant, researchers want to gather enough information to convince state legislators that medical examiners need to know a decedent’s prescription drug history. They also hope to learn more about whether or not the crackdown on availability of prescription pain medication has led more people to seek illegal opioids that can lead to overdoses.

“Not having access to the Prescription Drug Monitoring Program is a handicap to medical examiners whose role is to establish the cause and manner of death,” Goldberger said.

The grant is funded by the U.S. Department of Justice’s Bureau of Justice Assistance.

Doug Bennett joined the UF Health staff in January 2015 as a science writer and editor. His topic areas include anatomy; biochemistry and molecular biology; molecular genetics and microbiology; pathology,... END_OF_DOCUMENT_TOKEN_TO_BE_REPLACED