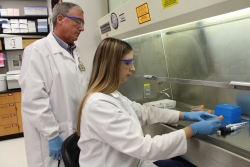 Seals are a potential source of a new strain of bacteria that could infect people and cause more severe disease than previously thought possible, University of Florida researchers report.

The scientists discovered the organism, a new strain of the bacteria mycoplasma, in tissue samples taken from the hips of an Alaskan hunter who became deathly ill days after returning home from a subsistence seal hunt. Among his symptoms: high fever, a swollen right middle finger and acute pain in both hips.

In an article that appeared in October in Clinical Infectious Diseases, the scientists reported that due to the known association between mycoplasma species with “seal finger,” an infection normally restricted to the fingers and hand, the likely cause of the man’s illness was a systemic spread of infection from the middle finger to the hips.

The findings describe what is believed to be the first known case of disseminated seal finger mycoplasmosis, said Daniel R. Brown, Ph.D., an associate professor of infectious diseases at the UF College of Veterinary Medicine.

“Although we weren’t able to get samples from the finger, the most likely explanation is that the infection traveled from the hunter’s hand to his hips,” Brown said. “It almost certainly had to happen that way.”The hunter survived the infection.

Although seal finger mycoplasmosis was first described more than 100 years ago, the manifestation of the disease in this case was unique, researchers said. Brown and his team became involved soon after tissue samples from the patient were sent to the University of Washington, where on the basis of general tests, scientists began to suspect mycoplasma infection.

The findings led the hunter’s medical team to delve deeper into their patient’s history, whereupon they learned that one week prior to the onset of symptoms, the hunter had harvested seals without wearing protective gloves and had been treated for pain and swelling of a finger after butchering a walrus.

The hunter’s physicians then contacted the Centers for Disease Control and Prevention, where staff aware of UF’s expertise in mycoplasma research and diagnostics put the Alaska group in touch with Brown. Brown’s research team subsequently determined through DNA sequencing of tissue and hip joint fluid samples that the particular strain of mycoplasma was unique and resembled strains previously seen in elephants and raccoons, as well as in domestic cats, but never before in seals.

“We’ve known that people can get ‘seal finger’ disease in their hands from hunting seals, but this situation was different as it went systemic and ended up in the hunter’s joints,” Brown said. “Its presumed spread from the patient’s finger to his hips is remarkable because such dissemination is unprecedented in prior reports of seal finger zoonotic mycoplasmal infection of the hand.”

The UF College of Veterinary Medicine houses the world’s largest collection of mycoplasma specimens. Researchers around the globe work through the Brown laboratory to access these samples to study the microbes in hopes of seeking potential remedies for diseases that affect plants, animals and humans.

Sarah Carey, M.A., A.P.R., is director of public relations at the University of Florida College of Veterinary Medicine, a job she has held since 1990. Formerly, she was editor of... END_OF_DOCUMENT_TOKEN_TO_BE_REPLACED