For more information on our ongoing response to COVID-19 in Gainesville, Jacksonville and Central Florida, visit our coronavirus website. END_OF_DOCUMENT_TOKEN_TO_BE_REPLACED 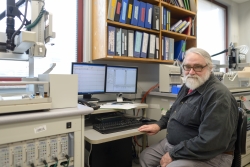 There are more than 1 billion cigarette smokers worldwide and another 600 million who chew betel quid, an addicting mix of areca palm nut that sometimes includes tobacco. Now, a group of University of Florida researchers has identified compounds derived from the areca nut that could help smokers and betel quid users break their addictions.

The compounds create new molecules that may lead to a treatment for betel quid addiction and a smoking-cessation medication with fewer side effects, researchers said. At least one of those compounds may prove to be especially useful, said Roger Papke, Ph.D., a professor in the UF College of Medicine’s department of pharmacology and therapeutics. The findings by Papke and co-investigator Nicole A. Horenstein, Ph.D., an associate professor in the department of chemistry, are being presented today at the American Chemical Society’s national meeting in San Francisco.

“We can see that there are common anti-addiction needs with betel quid users and smokers. We’re hoping to take what we have learned from betel quid research and create a drug that will help both groups,” Papke said.

The betel nut, a seed of the areca palm, is grown and used throughout India, parts of China and much of Southeast Asia, including Indonesia and most of the Pacific islands. Chewing the betel quid — a mixture of areca nut, spices and slaked lime wrapped in betel vine leaves — is a cultural tradition in those regions. In small doses, it creates a sense of euphoria and alertness. Prolonged use can create addiction and lead to oral cancer.

Findings published last year by Papke and Horenstein showed that the nut’s active ingredient, arecoline, acts on the same receptor proteins in the brain as nicotine. That finding, along with the documented side effects of smoking-cessation drugs such as Chantix, or varenicline, prompted the researchers to look for possible alternatives to quell betel quid addiction. Varenicline acts on sites in the brain that are affected by nicotine, but also causes unwanted side effects by targeting other, related receptors in the brain.

The idea, Papke said, is to find a new treatment that homes in on only the brain receptors involved in addiction.

“The molecules that we’re developing are more specific — they do not target those other brain receptors at all, so our compounds should be safer,” Papke said.

Horenstein is developing new compounds that are derived from arecoline but are also slightly different in structure. Horenstein said the ultimate goal is to design a compound that is selectively targets only addiction-related receptors in the brain — meaning that it could potentially treat nicotine and betel nut addictions without side effects. One of those new compounds, known as MPA, shows particular promise, researchers said.

“If the addiction and dependency mechanisms associated with betel nut are in fact similar to nicotine, there is clearly the possibility of helping many millions of people worldwide,” she said. “We’re at an early stage in the work but it’s very exciting.”

Next, Papke and Horenstein said they will seek funding to test the newly developed compounds in animal models. Other compounds found in the areca nut also need to be screened to determine if they are carcinogens, and more potent MPA-related compounds need to be made, Papke said.

While much research still needs to be done, Papke said finding a single treatment to address both nicotine and betel quid addiction would be a boon to public health worldwide.

“The health problems associated with betel quid use in Asia have been ignored for many years. It presents a clear and present problem, and people’s lives are being controlled by their addiction,” he said.

Funding for the research was provided by the National Institutes of Health.

Doug Bennett joined the UF Health staff in January 2015 as a science writer and editor. His topic areas include anatomy; biochemistry and molecular biology; molecular genetics and microbiology; pathology,... END_OF_DOCUMENT_TOKEN_TO_BE_REPLACED