The Heart & Vascular and Neuromedicine Hospitals: Part 1 — How Did We Get Here?

On November 2, we cut the ribbon on our new Heart & Vascular and Neuromedicine hospitals in a special event where more than 600 people helped us celebrate. For those of you who didn’t attend, a video of the opening remarks can be seen here. 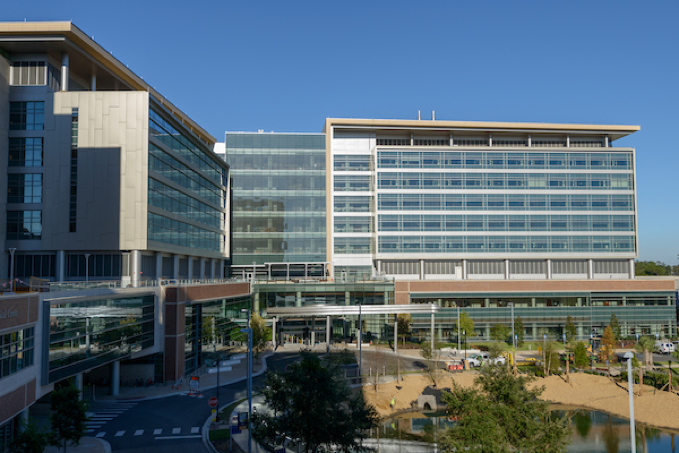 During our on-stage conversation, UF President Kent Fuchs asked me: “How did we get here?” I gave a brief answer, but needless to say there is much more to the story. In this three-part newsletter, I will try to give a more complete answer to the question. In this first part, I provide some background and context for why we decided to build these hospitals. Part 2 will consider aspects of design and construction, trying to explain the concept of “built around the patient.” Lastly, Part 3 will summarize our plans for using the vacated space in the original UF Health Shands Hospital to allow for modernization and expansion of other key services.

The Cancer Hospital and early growth rooted in the strategic plan

The UF Health Shands Cancer Hospital opened its doors in November 2009. It was sorely needed, as it provided contemporary space for patients who had a variety of medical needs that were not optimally served in the original Shands Hospital. We relocated and consolidated our expanding adult cancer program in an integrated manner, combining inpatient and outpatient treatment. In addition, we implemented an on-site laboratory to serve the bone marrow transplant program. Moreover, the Cancer Hospital went beyond cancer, and included a new adult emergency room and trauma center (including trauma operating rooms and intensive care units), as well as operating rooms and inpatient wards for surgical and orthopedic services.

Indeed, the 192 beds added by the Cancer Hospital increased our bed capacity by about 30 percent at that time. During FY09-10, however, overall hospital admissions increased by only 5 to 10 percent. Thus, we had excess capacity at that time, an issue that was addressed by the Forward Together strategic plan, which was developed during that year with input from leadership, faculty and staff throughout our academic health center and the hospital system.

Published in May 2010, Forward Together was based on the idea that a robust academic health center such as UF Health begins with a focus on patient care of the highest order, which then translates into greater clinical volumes and the financial capacity to recruit nationally recognized faculty and further fund the research and education missions. This creates a positive feedback loop such that UF Health would grow across time in size and stature. Key principles behind patient care of the highest order included direct patient care by faculty throughout the clinical enterprise; faculty ownership of outcomes; enhanced access to ambulatory care; “always say yes” to hospital-to-hospital transfers; location of new primary care offices in neighborhoods where patients live and creation of hubs with new buildings for specialty care; and a focus on hospitality and service throughout all layers of the organization.

While we are still working to implement these principles fully, over the next several years UF Health faculty and staff embraced these ideas and began to set the virtuous circle of patient care, research and education in motion. Due to their extraordinary efforts (i.e., due to the work of many of you), there was tremendous growth in patient demand for both inpatient and outpatient services. In a presentation to the UF Health Shands Board on Sept. 25, 2013, the figure below demonstrated the increase in hospital admissions. There was parallel growth in average daily census and surgical volume. As well, during this period there was even a greater rate of growth in faculty practice visits. 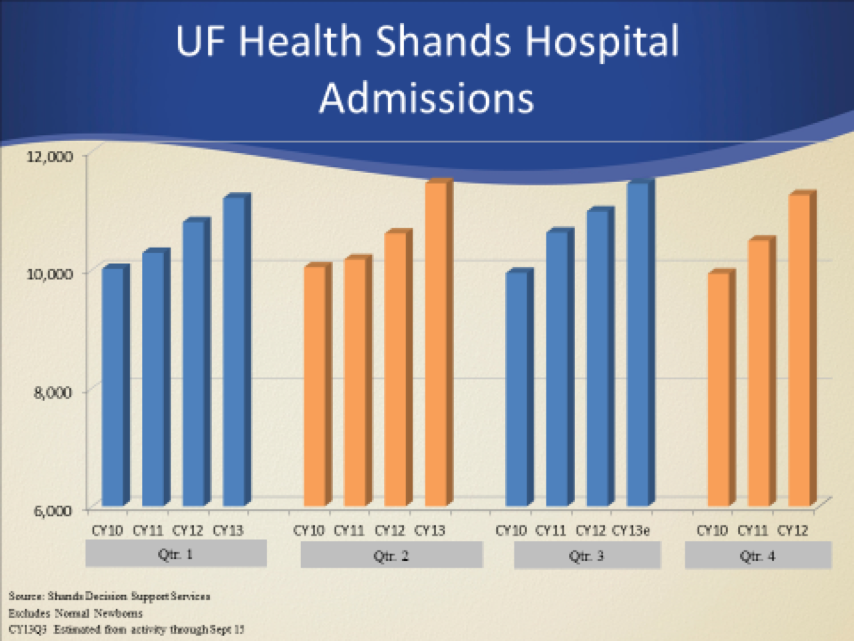 Decision point: to build or not to build

By the Fall of 2013, the daily bed census at UF Health Shands was reaching a level that our hospital CEO Ed Jimenez (then COO) called “gridlock.” In the figure below it can be seen that, across time, we were entering the zone of gridlock more and more. What gridlock means, from a practical standpoint, is that inpatient beds become filled to the point that there is a backup in emergency room patients needing these beds. Because of gridlock, more and more patients are held in the ER waiting for a bed, which creates even longer waiting times in the ER and fewer hospital-to-hospital transfers that can be accepted. A myriad of other consequences ensue, since not only do the patients admitted from the ED need a bed, but so do patients in recovery rooms and other areas, Similarly, there is an added urgency for patients holding in the ER to have their imaging studies done ahead of other patients. And at the floor level, the focus turns to discharges, which becomes very urgent. As a “system of care” gridlock means we tread water hoping that the number of today’s discharges are more than the number of today’s admissions. Through all this, the system grinds, people work harder and it doesn’t feel like we are getting ahead.  Meanwhile patients keep showing up in the ER, some of whom require admission, and outlying hospitals still need the talent, skills and equipment here at UF Health.

Such an environment, if sustained, leads to great difficulties in delivering optimal patient care and also leads to ongoing stress among faculty and staff as well as among patients and their families. 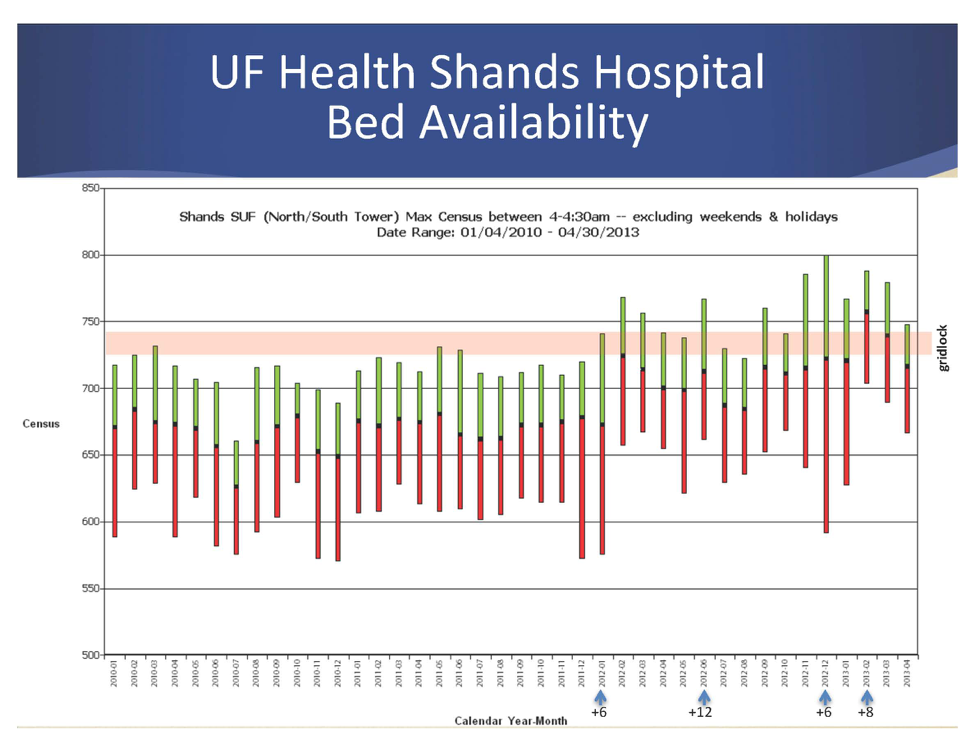 Therefore, at the Sept. 25, 2013 hospital board meeting, we discussed the possibility of building a new hospital wing to alleviate gridlock, accommodate growth and create modern space that would help us deliver on the vision of achieving significant national stature as an academic health center.

Of course there were risks to building such a hospital tower, mainly centered on the dark clouds and uncertainties that perennially seem to affect the health care landscape:

“Health care is moving from inpatient to outpatient,” say the pundits.

“Costs are increasing and reimbursements are decreasing.”

“Referrals to academic health centers will dry up because other systems will vertically integrate and only refer within their own enterprise.” And on and on.

We took a different view. It has been said that “when storm clouds come in, the eagle soars while the small birds take cover.” Yes, there was risk of building a new hospital only to find that the health care world had indeed changed in a manner that would challenge our financial sustainability. But, we argued, there was a much greater risk of not expanding: indeed could we accommodate growth and achieve our vision as an academic health center through piece-by-piece renovation of our existing chassis without allowing for growth? Could we attract and retain the best and brightest nationally to come to UF and expand the virtuous circle of patient care, research and education?

Our board members agreed that we consider the risks and benefits of a new hospital in more detail. We therefore scheduled an off-site board retreat and invited faculty who worked in specialties most in need of upgraded space, and who were in fields where population demographics would likely translate into the greatest future need: neurology, neurosurgery, cardiology, cardiac and thoracic surgery, and vascular surgery. At that time, UF Health leadership was planning to propose to the board that one hospital tower be added to the existing Cancer Hospital. Indeed, the two-story arm of the “T” that points south in the existing Cancer Hospital was built with a foundation that could support a total of nine floors, which would translate into about 10 operating rooms and 100 hospital beds. The figure below shows how this could be done with an adjacent parking garage. At that time, we thought that the space that would be vacated by one service (cardiovascular or neuromedicine) in the original Shands Hospital could then be renovated to accommodate the other.

At the retreat, however, four things became apparent. First, faculty representing both service lines — neuromedicine and heart and vascular care — made extremely compelling cases for why they needed new space for relocation and expansion. Second, it was not clear that it would be possible to renovate the vacated space in the original Shands Hospital in a manner that would truly meet the needs of the service line that would remain there. Third, even if it were possible to accomplish an adequate renovation, this would mean that all of the other services at the original Shands (internal medicine, family medicine, pediatrics, ob-gyn, transplant, burn, ENT) would then not have any elbow room to expand and that we would have to maintain many double-bedded wards for the foreseeable future. And fourth, any design that places a new tower pointing south from the existing Cancer Hospital, with an associated garage, creates very high density in one small area; rather, it became evident that we could create a much more patient-friendly design if we took advantage of property to the east of the Cancer Hospital.

As a result, we decided to explore the possibility of building two new hospital towers — one for neuromedicine and one for heart and vascular care. A detailed analysis ensued: design, patient benefit, expanded clinical opportunities in the original Shands Hospital, and cost. What emerged was a decision to proceed with the beautiful new building comprising the UF Health Neuromedicine Hospital and the UF Health Heart & Vascular Hospital.

Part 2 of this newsletter will describe the process by which these hospitals were designed and constructed.