UF Health to resume elective surgeries, procedures on Monday, May 4. For more information on our ongoing response to COVID-19 in Gainesville, Jacksonville and Central Florida, visit our coronavirus website. END_OF_DOCUMENT_TOKEN_TO_BE_REPLACED

UF researcher’s validation of method for assessing health, nutrition may save lives in developing nations 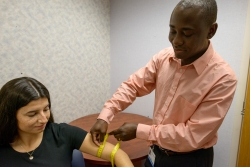 A recent study led by a University of Florida Health researcher and several other co-authors from Europe and Africa has validated the effectiveness of measuring the circumference of the upper arm to assess health and nutrition on school-age children and teenagers, ages 5 to 19.

A mid-upper arm measurement is simpler, faster and as accurate or more so than the height and weight measurements required for an assessment of body mass index, or BMI, researchers said. BMI is the current World Health Organization-endorsed standard to quickly assess a child’s nutrition in certain portions of the world.

This is critical in places where malnourishment and illness, particularly among HIV-infected children, are common. The use of this measurement method, called “mid-upper arm circumference,” or MUAC, can help schools and public health authorities target those in need of nutritional services and medical treatment.

MUAC directly measures muscle and fat, which are the body’s main nutritional stores. Bone circumference, researchers said, is minor at the upper arm and will not throw off the calculation, making the upper arm an ideal spot to take a measurement assessing nutrition and health.

Lead researcher Lazarus Mramba, Ph.D., a statistician in UF’s College of Medicine, said it can be challenging for clinicians trying to measure a child’s height and weight, and measurement errors are easily introduced. “You have two measurements to put together before you come up with BMI,” Mramba said. “Those are two potential errors that can be introduced. But if you are only measuring MUAC, there is only one potential measurement error.”

MUAC has been rigorously examined in children under 5 for years, but not in older children. Clinicians have been wary of using the method for those older than 5 years because of the lack of research in this older age group demonstrating MUAC’s accuracy when compared with BMI. The new growth reference curves extend the current World Health Organization growth curves among children up to five years old to include school age children and adolescents up to 19 years old.

MUAC has been around for years. But rigorously examined data validating its accuracy in developing world populations with high rates of malnutrition have been absent until this study, Mramba said. Clinicians have been wary of using the method in these groups because of the lack of research demonstrating its accuracy when compared with BMI.

Among 685 HIV-infected children and adolescents studied in Zimbabwe and Uganda, a mid-upper arm circumference measurement was at least as effective as BMI in predicting survival during the following year, researchers found.

Among 1,741 children in Kenya at increased risk of death after a hospital admission, MUAC was more effective than BMI in predicting survival during the following year.

All groups had undergone both BMI and MUAC measurements.

Mramba found that MUAC was at least as accurate as BMI for the group in Uganda and Zimbabwe, and more accurate in predicting survival of the Kenyan group.

The results, researchers said, “confirm that the new growth reference is valid for assessing nutrition status for African school-age children and adolescents.” The study itself focused on the 5- to 19-year-old age group to exactly match for comparison purposes a BMI study conducted earlier by WHO.

“MUAC is a very reliable and simple method that should be used,” said Mramba. “It helps identify individuals at risk of increased mortality so you can easily target them with direct financial resources and medical services.” The researchers overall conclusion is that: “With its practical simplicity, and now the availability of reference curves, mid-upper arm circumference can be used in place of body mass index to assess communities and individuals at hospitals, clinics and nutrition and HIV programs.”

Bill Levesque joined the UF Health staff in May 2017 as a science writer covering the Institute on Aging and research of faculty physicians in the College of Medicine. He... END_OF_DOCUMENT_TOKEN_TO_BE_REPLACED