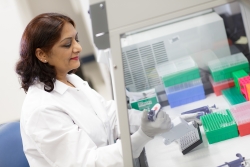 A genetic variation identified by researchers at University of Florida Health may help clinicians target a deadly form of leukemia using a promising drug therapy.

Acute myeloid leukemia, or AML, is a rapidly spreading type of cancer that affects the bone marrow and blood. The disease claims more than 10,000 Americans each year, many of them older adults. Advancements in chemotherapy drugs have improved the survival rates for AML patients, but the cure rate for this disease is dismal, which is why cancer researchers are exploring genetics to identify new drug targets and therapies and to make smarter decisions using existing chemotherapy agents.

In a study published in the Journal of Clinical Oncology, UF Health researchers in the UF College of Pharmacy found that genetic variation within patients with CD33 — a surface molecule that acts as a receptor for drug therapy on a leukemia cell — can predict the effectiveness of the anti-leukemic drug gemtuzumab ozogamicin, or GO. Cancer cells with adequate CD33 allow GO to bind it and enter the cell, eventually killing it. Cells without CD33, or with altered CD33 due to genetic variation, will not respond to GO.

“Our research showed that there is inherited genetic variation within the CD33 gene in people, which predicts how much CD33 is expressed on the cells,” said Jatinder Lamba, Ph.D., M.Sc., an associate professor of pharmacotherapy and translational research and the study’s lead author. “Most AML cells have this receptor, but the variation influences how much of the correct form of CD33 is present on the leukemic cells, allowing the drug to bind and get into the cells.”

Lamba said the presence of the genetic variation discovered by her group results in a short form of CD33, which does not bind to the drug, thus rendering GO ineffective.

GO received accelerated approval from the Food and Drug Administration in 2000 for treatment of relapsed AML in patients older than 60, but it was withdrawn from the market when the drug’s benefits were questioned during post-marketing clinical trials. Subsequent research, including multiple clinical studies in adult and pediatric AML patients, suggests the drug may have been prematurely withdrawn, and it may improve clinical outcomes for certain patients.

A significant number of AML patients will experience relapse, with the cancer returning in a more aggressive form. Five-year survival rates vary from 25 percent in the elderly to 60 to 70 percent in children. UF researchers found in the study that patients with a particular genotype had a 50 percent lower relapse risk when treated with GO, compared with patients receiving chemotherapy without GO.

Lamba said this finding is a big step toward precision medicine. By identifying patients who are more likely to benefit from GO based on their genotype, means those treated with the drug may have a lower risk of relapse.

“It is unusual to see such a significant drop in the relapse risk,” Lamba said. “At the same time, it is exciting because the impact of these findings could radically improve the treatment outcomes for AML patients.”

A major challenge in improving outcomes in AML is how response to therapy differs from patient to patient. As researchers learn more about genetic differences, new drug therapies can be developed to target patients who will benefit most from the therapy.

Lamba hopes these findings further build the case for genetic testing before cancer treatment —  allowing for maximum benefit for patients while also considering alternative treatment options for patients who are not likely to benefit from GO or similar drugs.

“Genotype testing allows clinicians to personalize treatments and administer medicines to only those patients who will truly benefit,” Lamba said. “At the same time, knowing the genomic profile will spare patients who will not benefit from the drug, by not exposing them to unnecessary toxicities.”

Matt Splett is director of communications for the College of Pharmacy. He leads efforts to enhance the college’s brand image through traditional and new media initiatives and serves as executive... END_OF_DOCUMENT_TOKEN_TO_BE_REPLACED