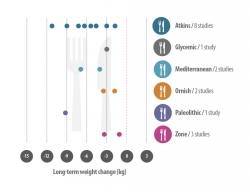 Dieting is a struggle for many people. Numerous popular diets offer the promise of weight loss. But which ones work? University of Florida Health researchers decided to find out.

While they found little scientific evidence showing whether many diets were effective, some diets demonstrated meaningful short- and long-term weight loss — a weight loss of 5 percent — in clinical trials.

Researchers, however, looked only at diets without calorie counts and/or recommendations of vigorous exercise, which are guaranteed to lead to weight loss. Do popular diets based only on what we eat — low-carbohydrate, grain-free diets and others — lead to a trimmer waist?

Of these, seven had been evaluated in clinical trials that met strict criteria set by researchers. And just two of those diets were evaluated by three or more trials.

“The small number of clinical trials examining the efficacy of many popular diets is concerning, as it indicates relatively little empirical evidence exists to support many current popular diets available, which are heavily marketed to the public,” said the study, recently published in the journal Nutrients.

According to U.S. News “Best Diet” methodology, a panel of experts examined research regarding each diet’s potential to produce both short- and long-term weight loss and assigned ratings. But UF researchers included only interventional clinical trials with at least 15 participants per group, study periods of at least 12 weeks, inclusion of study participants with a body mass index of at least 25 kilograms, and objective measures of weight with no self-reporting. They also excluded studies that did not follow the diet as prescribed.

The low-carbohydrate Atkins Diet came out far ahead of the pack, with 10 clinical trials evaluating either short- or long-term weight loss. It was followed by the moderate-carbohydrate Zone Diet, with three clinical trials. Those with two clinical trials apiece were the Glycemic-Index Diet, which emphasizes “good carbs” like bran cereal and vegetables; the Mediterranean Diet, rich in fruits, vegetables and whole grains; the Ornish Diet, a low-fat, vegetable-based program; and the Paleolithic Diet, based on foods available to early humans 2.5 million to 10,000 years ago. Finally, the Dietary Approaches to Stop Hypertension, or DASH, Diet — low in saturated fats and sodium — with one trial. 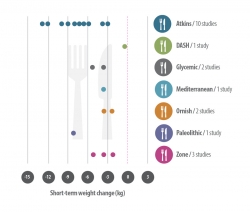 Other diets that demonstrated clinically meaningful weight loss in at least one study were the Mediterranean, Paleolithic and Zone diets.

Researchers said their review suggests that high-fat, low-carbohydrate diets “are the most advantageous” for promoting long-term weight loss.

“For not having specific calorie limits and not being paired with a formal exercise program, the magnitude of the weight loss on some diets was surprising and quite extensive,” said Anton. “Not to say this would work for every person, but it does suggest a potential approach that is successful for many people.”

Bill Levesque joined the UF Health staff in May 2017 as a science writer covering the Institute on Aging and research of faculty physicians in the College of Medicine. He... END_OF_DOCUMENT_TOKEN_TO_BE_REPLACED