Fat loss can be triggered through the brain in animal model, researchers find 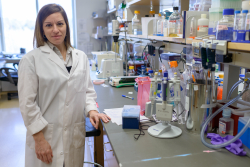 Stimulating the central nervous system to promote long-lasting weight loss that doesn’t depend solely on cutting calories is an intriguing idea, although the challenge will be finding an anti-obesity therapy that acts in that manner without negative side effects, said Isabelle Côté, Ph.D. Côté was a postdoctoral associate in the laboratory of Philip Scarpace, Ph.D., an emeritus professor in the UF College of Medicine’s department of pharmacology and therapeutics, when the research was conducted.

For now, though, the drug isn’t a panacea for obese people — development of Melanotan II as a pharmaceutical ceased in 2003 because it was associated with high blood pressure and other side effects. Humans could not be treated with the drug in the same way the rat models received it, Côté said.

Melanotan II was initially developed to prevent skin cancer and is known to activate two molecular signaling pathways in the brain. The researchers found that when the drug stimulated the brain’s central melanocortin system, the rat models lost body mass independent of a reduction in caloric intake.

After 19 days, rat models that did not receive Melanotan II gained body weight while those receiving the drug lost weight, the researchers found. Those two groups, plus a third one in which the rat models were given a low dose of the drug, were restricted to the same amount of food during the study. The findings were published recently in the Canadian Journal of Physiology and Pharmacology.

The drug’s short-term appetite suppression effect was already established, but researchers wanted to know more about how it could affect energy balance and body mass over a longer period of time, Côté said.

“Our data show that Melanotan II produces a long-lasting weight loss without the need of maintaining caloric restriction. We did not observe any change in spontaneous physical activity level and we found that calorie-matched group did not lose weight to the same extent as the Melanotan-treated animals, suggesting that the drug increases energy expenditure. In other words, it triggers weight loss independent of dieting or exercising,” Côté said.

The drug also produced positive effects on the amount of fat: Abdominal fat pads were 40 percent smaller in the animals that received either a low or high dose of Melanotan II compared with those that did not, and it appears that those effects were independent of caloric restriction. That, the researchers noted, suggests the central melanocortin system has the potential to be a unique regulator of lean body mass — all of the body’s non-fat weight.

Finding a way to regulate the body’s long-term energy balance independent of food consumption is important because most diets that rely on calorie reduction typically fail, Côté said. More than 75 percent of dieters regain their lost weight within five years, according to a 2001 study by other researchers. Currently, more than two-thirds of Americans are overweight and half of that group is considered obese.

That makes alternative approaches particularly attractive in the fight against obesity, the researchers noted. The current study showed that the melanocortin system can do just that: induce long-term body mass loss without restricting calories. The longer response was both unexpected and encouraging, said Côté, who is now a postdoctoral associate in the UF College of Medicine’s department of pediatrics.

Cutting calories is important in weight loss and combining that with a secondary effort such as targeting the melanocortin system may be a valuable anti-obesity tool, the researchers concluded. In the future, they plan to study whether using Melanotan II outside the central nervous system would deliver similar results. That approach might someday be an option in humans, they noted.

“The whole idea that you can modulate the body’s energy balance independent of diet through the brain is fascinating,” Côté said.

Researchers from the departments of psychiatry and aging and geriatric research collaborated on the work under the direction of Scarpace, who received funding from a National Institutes of Health grant.

Doug Bennett joined the UF Health staff in January 2015 as a science writer and editor. His topic areas include anatomy; biochemistry and molecular biology; molecular genetics and microbiology; pathology,... END_OF_DOCUMENT_TOKEN_TO_BE_REPLACED