On March 23, two days after the House of Representatives and the Senate voted to approve a $1.3-trillion omnibus spending bill, President Donald Trump signed the bill into law. Based on the provisions contained in this bill, the budgets for nearly all U.S. science agencies will grow in 2018.

In the Nov. 22, 2013 issue of On the Same Page, titled “From the Envy of the World to the Puzzle of the World,” I surveyed international funding for biomedical research, pointing out that many other countries were using our historical playbook of investment in research as the road to scientific discovery and improved treatments, while we seemed to be abandoning this tried-and-true strategy. All nations have an incentive to invest, very simply, to improve the health of their citizens. It’s good to know that, as a nation, we are beginning to get back on track.

Specifically regarding provisions that pertain to the National Institutes of Health, which provides the major funding for research at UF Health, there will be a major boost of $3 billion to the 2018 NIH budget over its 2017 amount — an 8.8 percent increase — bringing the total to a historic high of $37 billion.

The large increases for NIH and other science agencies came after Congress moved in February to relax mandatory spending caps for 2018 and 2019. That added $63 billion to the overall funding pot this year, but that number will grow only slightly in 2019, to $68 billion.

The 2018 budget for the NIH includes increases for several of the agency’s signature programs that will directly impact UF Health colleges. For example, the All of Us initiative, a 10-year longitudinal study that tracks the health of 1 million Americans (formerly known as the Precision Medicine Initiative), will receive $290 million, which is an increase of $60 million over 2017. The BRAIN (Brain Research through Application of Innovative Neurotechnologies) initiative will see a $140 million boost from last year, bringing the total to $400 million. Alzheimer’s disease research will be supported by a budget of $1.8 billion, a $414 million increase over 2017. The Centers for Disease Control and Prevention will receive $8.3 billion, an increase of $1.1 billion over the 2017 level. And the bill includes $996 million in funding for the 21st Century Cures Act, which was discussed in the Dec. 14, 2016 edition of OTSP.

Against the backdrop of this encouraging news, we were privileged to host a campus visit from NIH director Frances S. Collins on Monday, April 2, arranged by U.S. Rep. Ted Yoho. The UF Health Communications team has assembled an excellent video capturing the essence of Dr. Collins’ message, along with commentary by President Kent Fuchs and other UF leaders.

In a manner that was at once easygoing and humorous, but also incisive and authoritative, Dr. Collins conveyed a wonderful sense of enthusiasm and excitement about the current state of biomedical science and its potential for making a huge impact on our ability to improve the health of individuals and communities. He encouraged the assembled researchers and students to think big, be bold and take risks in the pursuit of scientific discovery: “We can develop that universal influenza vaccine, which we need if we’re going to be protected against a future pandemic or even just to get rid of annual flu shots that don’t work very well. We can come up with strategies to use gene editing to begin to find cures for those thousands of genetic disorders where we know the precise molecular defect, but we haven’t got a solution that will work in terms of therapeutics … I’m going to predict that five years from now, we will have cured sickle cell disease. It’s about time we had a molecular cure. I think we can do that.” 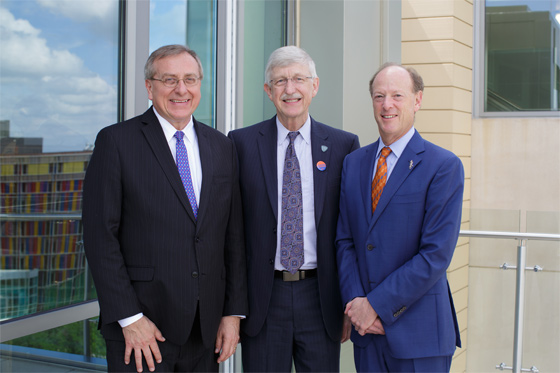 Dr. Collins also commented extensively on our responsibility for the nurturing of early-stage researchers, suggesting a number of ways that NIH is fostering this next generation of discovery. This point was driven home 10 days later with the release of a new National Academies of Science report, “The Next Generation of Biomedical and Behavioral Sciences Researchers: Breaking Through.”

Near the end of his remarks, Dr. Collins quoted from poet Peter Levi: “Hope in every sphere of life is a privilege that attaches to action. No action, no hope.” In a subsequent tweet on April 11, he goes on to state that, “at #NIH, our idea of action is to support the best investigators to apply the best science to find answers for the millions waiting for their hopes to be realized.”

We can all be motivated by Dr. Collins’ challenge: Thus, at the University of Florida, we are all about action, which by way of our fundamental discoveries and clinical translation, can deliver the treatments that our patients hope for and need.