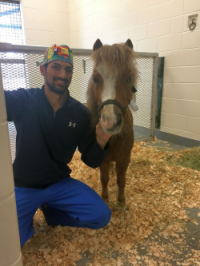 A year after a rare procedure at the University of Florida Large Animal Hospital and support from an internal fund tapped to assist in certain hardship cases, a miniature horse named Rico is thriving and back to his normal routine.

“Rico was found down and non-weight bearing lame last spring in a field,” said Taralyn McCarrel, D.V.M., an assistant professor of equine surgery at UF’s College of Veterinary Medicine. “His veterinarian diagnosed a dislocated right hip and contacted us to see what we would do and what it might cost.”

Although it was unclear what had caused Rico’s injury, trauma of some kind was suspected, McCarrel said.

Rico’s veterinarian, Jennifer Miller, D.V.M., said his injury was not one she’d seen often, and “certainly not in a full-sized horse.”

“The only horse that might have a surgical option would be a mini, so he had an opportunity that another horse might not have had, as surgery would just be too difficult,” Miller said. A larger horse’s weight would make even obtaining a diagnosis problematic, but she was able to get “pretty good” images of Rico’s leg, she said, aiding in his diagnosis.

At the time Miller responded to Rico’s owner’s call, she had a UF veterinary medical student working with her on a clinical rotation. The student was aware of an internal fund that was sometimes used to offset the cost of veterinary care in certain equine cases for teaching purposes and in cases of financial hardship on the part of the owner.

Miller knew that Rico’s owner, Shelby Lewis, a college student from Lake City, had limited funds, and that the type of surgery that might typically be conducted to fix the hip joint and hold it in place in foals with similar injuries would have been cost-prohibitive. She relayed the situation to McCarrel, who was able to obtain permission from UF Veterinary Hospital administrators to offset some of Lewis’ costs through the Boone Memorial Fund.

McCarrel then researched her approach, delving into the small animal literature and limited equine literature to prepare for a femoral head ostectomy in Rico. The procedure is a well-known surgical option in certain circumstances in dogs with hip dysplasia or a dislocated hip that will not stay in the socket on its own, similar to Rico’s case. However, femoral head ostectomies are seldom performed in horses.

“I’d never done one before, but I got as much information as possible about the different aspects of the procedure,” McCarrel said. “One of the important things that was emphasized was that if an animal has good muscle mass, that’s a positive. So that boded well for him.”

The reason Rico still had good muscle mass was because he came in for surgery soon after his injury, she said, adding that in long-standing cases, the muscles become small and weak due to lack of use from pain, thus there is little muscle to support the limb after surgery.

McCarrel was mostly concerned about accessing Rico’s hip joint with minimal trauma, as the joint in a mini-horse is much deeper than in a dog due to the very muscle mass that would help him retain strength in his recovery.

The femoral head ostectomy involves cutting and removing the top part of the femur, or thigh bone. This eliminates the hip joint, and transfers weight bearing to the muscles of the limb until a false joint, known as a pseudoarthrosis, forms through extensive physiotherapy, she said.

“Due to the depth of the joint and the approach needed to access the area, there is a risk of the incision falling apart after surgery due to fluid accumulation,” McCarrel said. “Therefore, Rico had a drain placed at surgery to remove excess fluid from the incision.”

The drain was removed several days later and Rico’s incision healed without complication. Rico went home approximately one week after his surgery, which was conducted April 6, 2017, with instructions for his owners to conduct physical therapy on him daily.

The rehabilitation program takes a lot of commitment on the owner’s part, but is essential to the success of the surgery, she said.

Lewis admits the process of recovery was not easy, for her or for Rico.

“When he first came back, I wasn’t sure I’d have enough time, but I had a friend who helped me work with him,” Lewis said. “About six months ago, I started taking him swimming, and that has also helped him.”

Just over a year after his procedure, he shows little sign of the trauma he endured.

Sarah Carey, M.A., A.P.R., is director of communications at the University of Florida College of Veterinary Medicine, a job she has held since 1990. Sarah holds a master’s degree in... END_OF_DOCUMENT_TOKEN_TO_BE_REPLACED