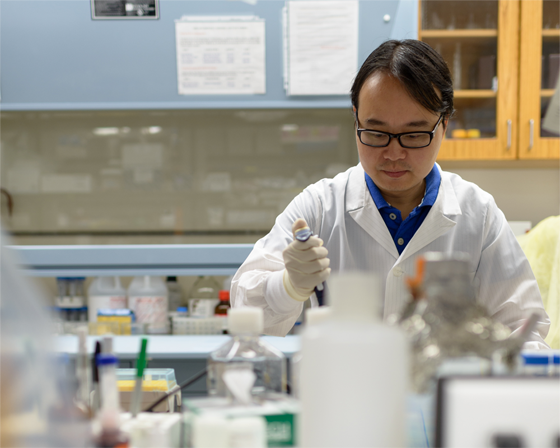 The worm could hardly be more different from the scientists studying it. This is patently obvious. Caenorhabditis elegans is a nematode the size of a pencil point with a mere 959 cells. The cell count in the average human is roughly 30 trillion.

A UF Health scientist and his Chinese collaborators, however, recently discovered the mechanism behind a hereditary hearing loss affecting tens of millions of people by examining two proteins the worm and humans share, even 600 million or so years after their common ancestor split down two forks in the evolutionary road.

Their research, published recently in the journal Neuron, expands the fundamental understanding of cell mechanics and could one day assist researchers in curing hearing loss or other genetic diseases that may yet be tied to related proteins.

“We are very excited by this finding,” said Rui Xiao, Ph.D., an assistant professor in the UF College of Medicine whose research involves geriatric medicine and pharmacology. “The beauty of basic scientific research is that it is sometimes unpredictable. You really don’t know where the project will lead you or who it might ultimately help.”

In collaboration with Lijun Kang, Ph.D., a professor at Zhejiang University School of Medicine in Hangzhou, China, the researchers discovered that these two “transmembrane channel-like” proteins, known as TMC1 and TMC2, influence how neurons and muscle cells conduct electrical signals, said Xiao.

Genetic mutations in one or both of the TMC1 and TMC2 genes can cause partial or total hearing loss in humans, although the mechanism had been unknown. The study by Xiao and his colleagues suggests that TMC proteins may act like an errant gatekeeper in the cell’s protective plasma membrane. Mutations of TMC will prevent a normal electrical signal, generated when hair cell sensory receptors in our inner ears respond to sound waves, from flowing through neurons leading to the brain. That means the brain is unable to interpret the signal as sound.

This revelation was made possible by C. elegans, a common worm found in Florida and around the world that is a bit of a scientific rock star. The nematode has been the subject of research that has generated three Nobel Prizes. It is the first multicellular organism to have its entire genome sequenced and has been the subject of zero gravity research on the International Space Station.

The worm’s scientific popularity is due, in part, to a simplicity that belies a fortuitous genetic complexity. Beyond the manageable number of cells and neurons, the worm is transparent, allowing an easy microscopic view of its organs. It also reaches adulthood in three days and has a lifespan of about three weeks, which means researchers can more quickly study successive generations. That makes the species especially useful for aging research.

Yet, C. elegans carries about 19,000 protein-coding genes compared with about 35,000 for humans, and roughly 80 percent of the nematode’s genes are related to those found in humans. So by studying the worm, scientists hope to gain insight into the mechanisms behind human disease.

Xiao and his colleagues were able to show that the mutations in the worm’s TMC1 and TMC2 genes largely prevented them from expelling eggs from its body. While the mutations’ impact on the species is different from that in humans — egg laying versus hearing — the principle is the same.

The worm’s muscle cells can’t communicate with its neurons because the mutations have shut off the electric flow between them like a closed faucet, the researchers found.

In fact, if the worm’s TMC1 and TMC2 genes are replaced by the same genes from humans or other mammals, the nematode’s defective reproductive system starts operating normally, indicating that TMC proteins might work in a similar way among different species.

Bill Levesque joined the UF Health staff in May 2017 as a science writer covering the Institute on Aging and research of faculty physicians in the College of Medicine. He... END_OF_DOCUMENT_TOKEN_TO_BE_REPLACED