University of Florida neuroscientists have validated a potential pathway to halt the progression of Alzheimer’s disease, a debilitating neurodegenerative disorder that affects millions of Americans and is the most common cause of dementia. The investigators made the finding while studying the toxicity of products that result from abnormal protein processing in the brain.

A wide body of genetic, pathologic and modeling literature all have shown how protein pieces called amyloid beta —known as Abeta — play a pivotal role in triggering Alzheimer’s disease. There are many forms of Abeta produced in the brain, but scientists recognize the accumulation of one form in particular — Abeta 42, which is composed of 42 amino acids — as key in promoting Alzheimer’s disease. Abeta peptides, or chains of amino acids, are produced by an enzyme called gamma-secretase. 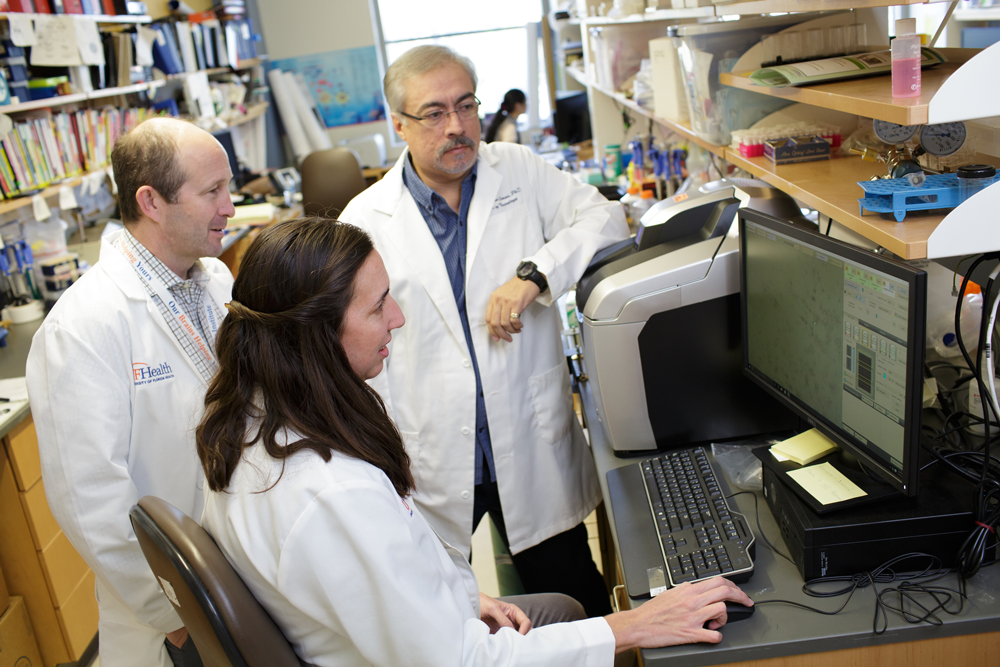 One class of compounds previously developed to treat Alzheimer’s disease is known as gamma-secretase modulators, which have been shown to lower levels of Abeta 42 but raise levels of shorter Abeta peptides. These compounds do not completely inhibit the enzyme, however, but instead shift the enzyme’s activity. Some studies have suggested that the increase of shorter peptides could be harmful.

But in the cover article of today’s issue of the Journal of Experimental Medicine, a team of neuroscientists at the Evelyn F. and William L. McKnight Brain Institute of the University of Florida report that the short Abeta peptides were not toxic in two animal models — a mouse and a fruit fly — and in fact were protective from the toxic effects of Abeta 42, said MBI director and senior author Todd E. Golde, M.D., Ph.D.

The findings hold the potential for a drug therapy to stop Alzheimer’s progression to be tested in humans. Medications currently in use target the symptoms but not the disease progression of Alzheimer’s. More than 5 million Americans are currently living with the disease.

“We hope this finding will renew interest in the pharmaceutical industry to reinvest in developing new gamma-secretase modulators,” said Golde, a professor of neuroscience at UF’s College of Medicine, part of UF Health. “Our findings indicate that the last concern about this class of molecules is gone: There are now multiple lines of evidence to show that if one can find the right molecule, that molecule should be safe enough to use in a prevention setting.”

Said lead author Brenda D. Moore, Ph.D., of UF’s Center for Translational Research in Neurodegenerative Disease, “This study further validates the use of gamma-secretase modulators as therapeutics for Alzheimer’s disease.”

Added Golde: “We feel this is the last piece of biology that was needed to support further development of these compounds known as gamma-secretase modulators. If Abeta is the trigger, you have to stop the accumulation from forming in the first place, and that requires a drug that’s at least as safe as the statins we use to lower cholesterol levels. No drug is 100 percent safe, but that’s the bar.”

Previously developed drug therapies aimed at thwarting abnormal Abeta accumulation have not been successful, and it’s believed that some of the most promising ones have yet to make it to trial because of concerns over safety in humans.

The new results, said Golde, “really nail down that gamma-secretase modulators show promise to be safe, based on these preclinical studies."

Golde draws a parallel to using statins, a class of drugs used to control cholesterol levels in the blood.

“The way to think about this is, you have a drug that lowers your bad cholesterol and raises your good cholesterol. That’s sort of what this paper is saying for gamma-secretase modulators for Alzheimer’s disease,” he said.

“This paper illustrates the power of fruit flies to solve issues that are difficult to approach in more conventional models of the disease,” said co-author Diego Rincon-Limas, Ph.D., an assistant professor of neurology in the UF College of Medicine. “It’s a nice example to dissect complex, fundamental questions in the field.”

The study also opened new questions about the role of short Abeta peptides in the disease process and how some may actually protect against Alzheimer’s disease.

Michelle Koidin Jaffee is the Science Writer for the McKnight Brain Institute of the University of Florida. In more than 20 years as a journalist, she worked as a reporter... END_OF_DOCUMENT_TOKEN_TO_BE_REPLACED