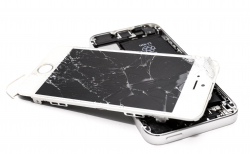 An unexpected ability of cells to bend metal determines the safety of silver nanowires — highly conductive nanomaterials a thousand times thinner than a human hair that are being used in next-generation touchscreens for smartphones and consumer electronics, a transnational team of scientists that includes University of Florida researchers has found.

As manufacturers seek to transition from rigid touchscreen displays, which use brittle indium tin oxide, to flexible ones that can bend, roll or fold, they are turning to emerging technologies such as silver nanowires, but their safety has been a concern. To begin to assess potential risk, the scientists investigated nanowires of different lengths and thicknesses for their toxicity to skin cells, and reported their conclusions July 8 in the Proceedings of the National Academy of Sciences: Thin wires are safer, and work as well or better than thick wires.

“Safety doesn’t have to come with a cost to performance,” said Chris Vulpe, M.D., Ph.D., a co-author of the study and a professor at the UF College of Veterinary Medicine whose expertise is in ecotoxicology.

The team, part of an international consortium known as Safe Implementation of Innovative Nanoscience and Nanotechnology, or SIINN, includes investigators from UF, the Lawrence Berkeley National Laboratory, Université de Grenoble-Alpes in France, the University of Lille in France, and other European institutes.

“Long and skinny silver nanowires bear a striking resemblance to a notoriously toxic material of the 20th century: asbestos,” said study corresponding author Benjamin Gilbert, Ph.D., a Berkeley Lab scientist who co-led the effort. Hence, the researchers thought “long would be bad,” as with asbestos.

But in toxicity studies on skin cells, carried out by Sylvia Lehmann, Ph.D., at Université de Grenoble-Alpes and Devrah Arndt, Ph.D., a postdoctoral associate with expertise in nanotoxicology at UF, the researchers were surprised to discover that the toxicity of silver nanowires is primarily related to their diameter rather than their length.

Previous work had not considered thickness because no one had been able to tune nanowire diameter during synthesis, a feat that graduate student Djadidi Toybou, working in the Grenoble laboratory of Caroline Celle, Ph.D., and Jean-Pierre Simonato, Ph.D., achieved for the first time.

Both thin and thick nanowires are absorbed by skin cells and directed to the lysosome, a sort of cellular garbage dump, but super high-resolution X-ray imaging at the European Synchrotron Radiation Facility revealed that what happens inside the cell is completely different.

“It’s really amazing; the cell can crumple up the thin metal wires like cellular hairballs,” Vulpe said. In contrast, the cell can’t bend the thick nanowires, which fully stretched out are too long to fit in the lysosome. Ultimately, the thicker wires cause the lysosome to burst, poisoning the cell with cellular garbage.

The observations clearly implicate the ability of the cell to mechanically deform the thin nanowires as being critical for reducing toxicity of the thin wires, compared with thick ones, the scientists said. But to be useful, the nanowires need to work well in a touchscreen. Remarkably, the scientists found that the thin wires performed as well as, or better than, thicker wires as conductors.

“We were able to show that silver nanowire toxicity can be greatly diminished by reducing nanowire diameter without affecting device performance,” Gilbert said.

Nanowires have multiple potential applications in consumer products, from wearable electronics to heated clothes, so manufacturers can now make a more informed choice.

This work illustrates that interdisciplinary collaboration can identify approaches to reduce the potential harm from advanced nanotechnologies early in the design stage,” said study co-lead Laurent Charlet, Ph.D., of the Université de Grenoble-Alpes.

Funding for the study was provided in part by the European Union’s ERA-NET SIINN program and the U.S. Consumer Product Safety Commission.

Sarah Carey, M.A., A.P.R., is director of communications at the University of Florida College of Veterinary Medicine, a job she has held since 1990. Sarah holds a master’s degree in... END_OF_DOCUMENT_TOKEN_TO_BE_REPLACED