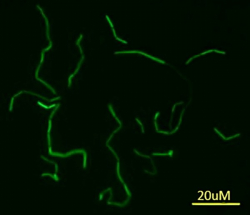 A bacterium commonly found in fermented foods can be used to deliver therapeutic protein and prevent a common, sight-stealing diabetic complication in mice, University of Florida Health researchers have found. If clinical studies also succeed, such genetically engineered probiotics could be an effective and affordable treatment option for diabetic complications in humans, the researchers said.

A genetically engineered version of the common Lactobacillus paracasei bacterium can act as a delivery vehicle, enabling simple and effective production of a crucial therapeutic protein. That protein then breaks down a hormone involved in the development of diabetic retinopathy, a condition that damages light-sensitive eye tissue.

In two mouse models of diabetic retinopathy, the engineered bacterium and the human protein it ultimately produces completely prevented the loss of nerve cells in the retina and reduced damage to capillaries, the researchers found. Untreated diabetic mice lost about 20 percent of their retinal ganglion cells. The findings were published recently in the journal Molecular Therapy- Methods & Clinical Development.

The bacterium’s role is significant and promising for several reasons. It is relatively easy to engineer in large quantities, ability to survive in the digestive tract, and is already being used in food such as yogurt and cheese as well as probiotic supplements, said Qiuhong Li, Ph.D., an ophthalmology researcher in the UF College of Medicine.

There is also a disease-driven urgency: Retinopathy is the most common diabetic complication and the leading cause of severe vision loss in people under the age of 60, other research shows.

Li is already working with a private company to develop a food-grade formulation that could be tested in animal models and human clinical trials.

To establish their findings, diabetic mice were treated with the engineered bacterium three times per week for eight to 12 weeks. The crucial protein, known as angiotensin converting enzyme 2, or ACE2, was detected in the blood, kidney, lungs and eye. That, Li said, showed that the bacterium was a feasible delivery method for therapeutic proteins to treat diabetic complications.

The findings also help to clear scientific and patient-related hurdles. There are a number of challenges for conventional protein drug delivery, from manufacturing, formulation, administration, to poor bioavailability and other challenges. To overcome those obstacles, UF Health researchers genetically engineered a probiotic species to secrete the ACE2 protein and evaluated its effectiveness the mice. They showed that oral delivery of the modified probiotic bacteria reduced diabetes-related loss of retinal capillaries — an early sign of diabetic retinopathy in humans. The probiotic treatment also reduced diabetes-induce retinal inflammation and damage to neurons.

The results also have implications beyond diabetic retinopathy: The same technique could possibly be used to someday treat other diabetic complications such as nephropathy and neuropathy, Li said.

Next, Li and her colleagues want to learn more about an ideal formulation and minimally effective doses of the bacterium and how often it should be consumed. They also need to better understand the mechanisms underlying the beneficial effects of probiotics and ACE2 and further investigate the treatment’s molecular, metabolic and physiological effects on other organs including the gut microbiome, intestine function and the immune system, Li noted.

That the bacterium is relatively easy to genetically modify and inexpensive to produce in large quantities is particularly encouraging, Li said. Food-grade probiotics that produce ACE2 can be easily scaled up using current technology and that makes the approach efficient and cost effective.

“Diabetes is a global pandemic, so cost effectiveness is an important consideration,” she said.

Researchers from the UF College of Medicine’s department of physiology and functional genomics and the University of Alabama at Birmingham collaborated on the study. Funding was provided by grants from the National Institutes of Health (EY021752 and EY024564), the American Diabetes Association and the BrightFocus Foundation.

Doug Bennett joined the UF Health staff in January 2015 as a science writer and editor. His topic areas include anatomy; biochemistry and molecular biology; molecular genetics and microbiology; pathology,... END_OF_DOCUMENT_TOKEN_TO_BE_REPLACED