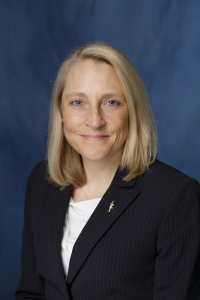 After a lengthy national search, Dana Zimmel, D.V.M., has been named interim dean of the University of Florida College of Veterinary Medicine.

“She also is a proud alumna and graduate of the college’s Class of 1995 and a respected leader in the veterinary medical profession nationally,” the statement said. “We are delighted that Dr. Zimmel has agreed to serve in this capacity as we continue to move our missions of teaching, research, clinical service and extension forward.”

A clinical professor in the college’s department of large animal clinical sciences in addition to her administrative role, Zimmel joined the university in 2002, working first in extension, then large animal medicine and later progressing to leadership roles. She became chief of staff of the UF Veterinary Hospitals in 2010, when the position was created in alignment with the UF Health strategic plan, focused on patient-centric care, and held that position until her appointment to the associate dean role in 2015.

Under her leadership, hospital caseload has grown from 20,542 patients in fiscal year 2011 to 41,811 patients seen in fiscal year 2019, with another 6,578 animals treated at the UF Pet Emergency Treatment Services clinic in Ocala. In 2012, Zimmel spearheaded the effort to create UF PETS, which has evolved as a hugely successful collaboration with Marion County-area veterinarians.

Zimmel also received the college’s prestigious Alumni Achievement Award in 2013 in recognition of her accomplishments.

Nelson and Payne thanked Tom Vickroy, Ph.D., for serving as acting dean following the retirement of James W. Lloyd, D.V.M., Ph.D., in May.

"Dr. Vickroy has handled this role, in addition to his ongoing role as executive associate dean, with grace and has ensured the smooth continuity of operations and college life,” the UF administrators said. In addition, they thanked the search committee, and specifically its co-chairs, Isabel Garcia, D.D.S., a professor and dean of the UF College of Dentistry, and Nick Place, Ph.D., dean and director of UF/IFAS extension, for their efforts.

“We look forward to what the future holds for the college under Dr. Zimmel’s leadership,” Nelson and Payne said.

The UF College of Veterinary Medicine is ranked ninth among veterinary colleges nationwide, according to U.S. News & World Report.

Sarah Carey, M.A., A.P.R., is director of public relations at the University of Florida College of Veterinary Medicine, a job she has held since 1990. Formerly, she was editor of... END_OF_DOCUMENT_TOKEN_TO_BE_REPLACED