Developing a next-generation coronavirus test for home use 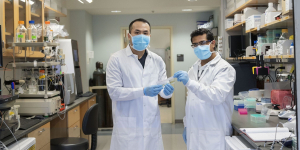 Piyush Jain was headed home from another late night in his University of Florida lab when he got the word from his grad student — the rapid test they had been trying to develop for the novel coronavirus worked.

While not yet approved for commercial use, the test uses a strip comparable to a pregnancy test to give a quick visual indicator of the presence of the coronavirus in the body.

“The idea is to have a paper-based system where people can just look at it and say, yes, you have it, or not,” he said.

Jain, a chemical engineering professor in UF's Herbert Wertheim College of Engineering whose background is in pharmaceutical sciences and biomolecular engineering, has been working on improving CRISPR-based testing and applying it to a range of diseases. Long Nguyen, a doctoral student in Jain’s lab, had developed this platform for detecting prostate cancer, HIV and hepatitis C.

“As soon as the novel coronavirus emerged, I saw an application of this technology and immediately jumped right into it,” Nguyen said. “I was super excited not only that the test worked, but also that it showed significantly higher sensitivity compared to other CRISPR-based detection technologies.”

Although it has not yet been tested in humans, the goal is a test that can be administered at home in less than 30 minutes, eliminating the need for a trip to a health care facility. And because it identifies the virus itself, not its antibodies, Jain says the test can aid in early detection for patients with an active infection, which would help people know to self-isolate. The disadvantage of antibody testing, Jain explains, is that it can’t distinguish if the patient had a past infection or is currently infected.

The next step is testing on human samples, then clinical trials, which Jain, who is also a member of the UF Health Cancer Center, hopes will be conducted at UF.

“We have all the necessary resources and support to do things here,” said Jain, who came to UF from the Massachusetts Institute of Technology in 2018.

The breakthrough is similar to a CRISPR test in development at the University of California San Francisco, but with modifications to the CRISPR system that make the test more sensitive, allowing it to work faster.

“We're not developing a totally new system,” Jain said. “The best analogy is we’re making a better engine for a car that other people are building,” he said. “When we have a better engine, we can go faster.”

Since the preprint of the study published on April 14, Jain has fielded requests to collaborate from around campus, including a potential effort to develop a coronavirus vaccine.

“I’m really proud of UF after seeing this response — not just for me, but for COVID-19 in general,” he said. “It’s wonderful.”