For more information on our ongoing response to COVID-19 in Gainesville, Jacksonville and Central Florida, visit our coronavirus website. END_OF_DOCUMENT_TOKEN_TO_BE_REPLACED

Half of former NFL players who used opioids early in their retirement were still using opioids nine years later, according to a new University of Florida study. Those retirees were also more likely to report moderate to severe depressive symptoms and low mental health-related quality of life. 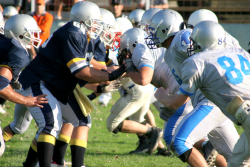 Previous studies have found that NFL players often are overprescribed opioids for pain management and many retirees continue using them. The UF study, which appears in the journal Drug and Alcohol Dependence, is the first to examine the possible long-term consequences of opioid use among retired professional football players.

Long-term opioid use so many years after retirement may be due to a complex set of factors, said Zachary Mannes, Ph.D., M.P.H., the study’s lead investigator and a recent graduate of the doctoral program in clinical psychology at the UF College of Public Health and Health Professions, part of UF Health.

“It’s hard to imagine that bodily pain doesn’t contribute to continued opioid use, as retired NFL athletes may rely on opioids in an effort to manage chronic pain that has developed as a result of an accumulation of orthopedic injuries during an NFL career,” said Mannes, currently a postdoctoral fellow at the Columbia University Mailman School of Public Health.

But while opioids can be effective for acute pain management, their use isn’t recommended for chronic pain and can lead to greater pain sensitivity, actually reducing the likelihood of chronic pain recovery, Mannes said.

Retirees might also be using opioids as a way to cope with mental health issues.

“It is possible that NFL retirees with depressive symptoms are more likely to self-medicate their mental health symptoms and emotional pain through use of opioids,” Mannes said.

For the study, researchers conducted phone interviews with 90 former NFL athletes who had previously participated in a 2010 study examining the prevalence and risk factors of opioid use and misuse among NFL retirees, led by Linda B. Cottler, Ph.D., M.P.H., FACE, a dean’s professor in the UF department of epidemiology and PHHP’s associate dean for research. In interviews conducted in 2019, participants responded to questions about their NFL careers, substance use, pain factors, current depressive symptoms and mental health-related quality of life.

Researchers found that nearly 50% of participants who reported using opioids in 2010 were still using them. Approximately 60% of retirees using opioids in 2010 had experienced moderate to severe depressive symptoms in the past week and they reported lower scores on a measure of mental health-related quality of life. The findings were significant even after accounting for other factors that could contribute to mental health consequences, such as use of other substances, pain and concussions.

Last year the NFL and NFL Players Association passed a mandate that each NFL team employ a behavioral health team clinician, and the NFL has also instituted the Total Wellness program to support current and former players.

“This study provides relevant findings to assist these initiatives and the health care providers of retired NFL athletes,” Mannes said. “Though the modest sample size limits generalizability of findings, these results support the need for team medical staff and medical professionals working with retired NFL athletes to assess and monitor opioid use, as well as refer for appropriate behavioral health treatment if needed. Moreover, alternative pain management strategies should be considered, particularly exercise, physical rehabilitation and psychotherapeutic methods.”

In addition to Mannes and Cottler, the study team included Eugene Dunne, Ph.D., an assistant professor of psychiatry and human behavior at Brown University; Erin Ferguson, a UF graduate student in clinical psychology; and Nicole Ennis, Ph.D., an associate professor at the Florida State University College of Medicine.

Jill Pease is the public relations director for the UF College of Public Health and Health Professions. She is responsible for developing public relations and communications strategies to promote the... END_OF_DOCUMENT_TOKEN_TO_BE_REPLACED