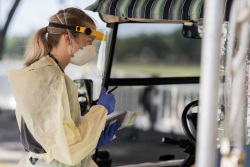 University of Florida Health virologist John Lednicky was in the seventh grade, living in the Philippines where his father worked, when he enjoyed a meal of a delicious bat stew. Fruit bat was a local delicacy.

Lednicky developed a severe viral respiratory infection, one that he never forgot. Was there a link between his illness and that bat?

“Maybe my illness was purely coincidental,” said Lednicky, Ph.D. “Was it a coronavirus? I have no idea. But that’s how I got interested in bats.

That boyhood surprise blossomed into a career as a leading virologist whose interest in bats, in a sense, set him on a road to make an outsized impact during the current coronavirus crisis. Lednicky developed the coronavirus test that is being used as part of an epidemiological public health study in The Villages® to better understand how the virus moves through a community of older adults, by identifying people with early disease who are not yet exhibiting symptoms.

His test, which has not yet received U.S. Food and Drug Administration approval, also is being used in Jacksonville as part of the same research effort.

The UF College of Public Health and Health Professions’ department of environmental and global health and the UF Emerging Pathogens Institute are leading a joint, around-the-clock effort to better understand and track the coronavirus in health care and community settings. The effort involves numerous scientists, laboratory technicians and support staff working tirelessly behind the scenes as UF Health and local and state health officials move to mitigate the impact of COVID-19, the disease caused by the novel coronavirus.

That work is spearheaded by Lednicky, a member of the college’s department of environmental and global health and the Emerging Pathogens Institute, and Glenn Morris, M.D., M.P.H., the director of the institute.

“UF Health has phenomenal in-house expertise to address a public health emergency like this,” Morris said. “We have the capacity to deal with emerging pathogens. This is what we do. We’re here to protect the state of Florida.”

And everyone is supported by the tireless efforts of UF Health Pathology Laboratories, whose personnel are working in shifts 24 hours a day to process the coronavirus tests.

Lednicky’s test has its roots in a study he previously conducted to track other types of coronaviruses in bats. All bats carry a stable of viruses, which most of the time pose little danger to human.

Their immune system is a box of mysteries. For example, Lednicky said, a bat’s temperature varies each day, with its roosting temperature different than its flying temperature. And it remains a puzzle how that cycling affects the virus in the bats

Four years ago, Lednicky developed a test to detect betacoronaviruses in the Brazilian free-tailed bat, one of the most common bats in the Americas and one of two bat species also found in Gainesville. As a virologist, he’s keenly interested in tracking previously unidentified viruses in the wild.

Lednicky has been studying coronaviruses and other types of viruses for more than 35 years. He focuses on respiratory viruses.

“Coronaviruses from a virology perspective are fascinating to study because a lot of the rules you have in virology don’t seem to apply well to them,” he said.

Coronaviruses, for example, tend to survive longer on environmental surfaces than many other enveloped RNA viruses like it, Lednicky said. “We’re not sure why,” he noted.

Like other coronavirus tests, Lednicky’s focuses on collecting two pieces of the virus’ genetic material unique to betacoronaviruses. Those pieces are then “amplified” in the laboratory, reproduced many times over until they can be detected by scientists in the laboratory.

While a virus can mutate and alter itself, creating new variants of coronaviruses, some essential parts of their genetic fingerprint cannot change. Otherwise, the virus won’t survive.

After his study was done, Lednicky put the test on a shelf and hardly thought about it until reports began to surface in China last fall about a virulent new coronavirus.

“As soon as the Chinese posted the genetic code of this new virus, I was curious to see if my test would pick it up,” Lednicky said. “And I was surprised. My test was a very good fit for the virus. I’m a scientist. We’re always wanting to figure out if our work is helpful for things other than what it was designed for.

Lednicky’s test is being used for public health research, like the study being conducted in The Villages® and now in Jacksonville. The research study has been reviewed and approved by UF Health’s Institutional Review Board, or IRB, which is a group of scientists, non-scientists and community members. The IRB ensures that a patient’s rights and welfare are protected during ongoing research.

Most clinical tests in the United States are run using a different test made available through the U.S. Centers for Disease Control and Prevention.

Lednicky tweaked his test in an effort to make it more precise. “It’s a very accurate and sensitive test,” he said.

“It’s my hope that this test can be used by UF Health to good effect,” he continued. “We’re all here for the patients.”

Morris said EPI scientists are continually working on pathogens around the world as a matter of routine.

“It’s not like this test was some great breakthrough,” Morris said. “This is us doing our business. We’re here. We do it well. We have substantial expertise.”

Bill Levesque joined the UF Health staff in May 2017 as a science writer covering the Institute on Aging and research of faculty physicians in the College of Medicine. He... END_OF_DOCUMENT_TOKEN_TO_BE_REPLACED