For more information on our ongoing response to COVID-19 in Gainesville, Jacksonville and Central Florida, visit our coronavirus website. END_OF_DOCUMENT_TOKEN_TO_BE_REPLACED

As the opioid epidemic continues to grip the nation and kills tens of thousands every year, a new study led by researchers at the University of Florida suggests kratom could be a prime treatment option for opioid dependence. 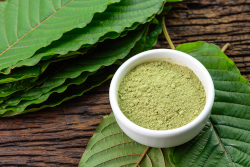 Kratom users have reported similar experiences for years, but the UF study published in the journal Drug and Alcohol Dependence is one of the first preclinical investigations to validate these claims.

“There have been a lot of anecdotal reports suggesting kratom has some pain-relieving properties and has helped transition users from prescription opioids to this product,” said Chris McCurdy, Ph.D., a professor of medicinal chemistry in the UF College of Pharmacy. “Scientifically, this becomes one of the most important kratom studies released showing support as a potential treatment option for opioid withdrawal syndrome or opioid use disorder.”

In Southeast Asia, people boil freshly harvested leaves to make a tea, which has been reported to demonstrate stimulant and opioid-like properties. While Southeast Asians have used kratom for hundreds of years seemingly unharmed, controversy has swirled in the West around its safety. U.S. regulators have expressed concern that kratom can be abused for its opioid-like effects.

The UF study evaluated lyophilized kratom tea, or LKT, which McCurdy found contains more than 20 alkaloids, or organic compounds, in varying levels. LKT is considered one of kratom’s truest forms, most similar to the traditional preparation. Some, but not all, products available in the West are highly concentrated extracts or have been formulated as manufactured products with manipulated levels of alkaloid content.

When administering LKT in animal models, UF scientists found kratom produced significant pain-relieving effects. Kratom’s pain benefits were also shown to originate from interactions with mu-opioid receptors. These receptors are found in cells throughout the central nervous system and regulate physiological response to pain medicines, such as morphine.

“Most of the pain relief and withdrawal effects of LKT are mediated via the mu-opioid receptor,” said Jay McLaughlin, Ph.D., a professor of pharmacodynamics in the UF College of Pharmacy. “If you block that receptor, you’re going to lose its ability to block pain.”

Kratom also demonstrated benefits in treating opioid withdrawal, a severe condition resulting from opioid dependence. Current medications for opioid withdrawal syndrome include methadone and buprenorphine, but these drugs have limitations and side effects.

Morphine-dependent animals were given LKT in varying doses and their symptoms were measured. Even at a low dose, LKT significantly reduced withdrawal symptoms. LKT also did not show the side effects associated with the current medications.

Respiratory issues are another side effect common with opioid medications. As depressant drugs, they can slow a person’s breathing rate, even to the point of death. UF’s experiments showed LKT did not induce respiratory depression, which reduces the likelihood of an opioid-like overdose death.

“What we learned was that across a wide dosing range — all the way up to the average human equivalence dose that people use — kratom was very safe and did not affect respiration or coordination,” McCurdy said. “It looks to be a very safe and efficacious product in the model we used and in the more traditional-inspired form of medication that we used.”

While federal regulators evaluate the safety of the plant, McCurdy and colleagues are contributing data through multiple kratom studies. The National Institute on Drug Abuse has awarded UF two multimillion-dollar grants to examine kratom’s individual alkaloids and investigate the different ways it is consumed.

An online version of the study “Lyophilized Kratom Tea as a Therapeutic Option for Opioid Dependence” was published in the journal Drug and Alcohol Dependence. Lisa Wilson, a graduate student in the UF College of Pharmacy, served as lead author of the study, while McCurdy and McLaughlin were co-authors.

Matt Splett is director of communications for the College of Pharmacy. He leads efforts to enhance the college’s brand image through traditional and new media initiatives and serves as executive... END_OF_DOCUMENT_TOKEN_TO_BE_REPLACED