For more information on our ongoing response to COVID-19 in Gainesville, Jacksonville and Central Florida, visit our coronavirus website. END_OF_DOCUMENT_TOKEN_TO_BE_REPLACED

Allen Korson went from a kidney stone ailment to needing a multiorgan transplant, both lungs and a liver, one of the rarest procedures performed in the United States due to its complexity. 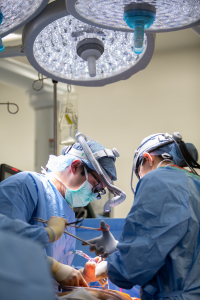 There had only been 125 double-lung and liver transplants performed in the United States before this year. When Korson arrived in Gainesville, UF Health surgeons had never attempted the complicated procedure.

But UF Health’s pulmonology and lung surgery program, ranked No. 37 in the U.S. News & World Report’s 2020-21 Best Hospitals survey, often receives referrals for complex cases other facilities reject due to patient age or preexisting conditions that make it difficult to operate.

“A lung transplant is a highly complicated procedure, and so is a liver transplant. The intricacies and the associated risks are all part of the reason the procedure is so infrequent,” said Thiago Beduschi, M.D., chief of the division of transplantation and hepatobiliary surgery and director of UF Health’s abdominal transplant program.

For Korson, it would be a lifesaver.

After having his kidney stone surgically blasted in August 2018 at a hospital in Port St. Lucie, Korson was hospitalized with septic shock for six days.

After he was discharged, he developed a cough. A very bad, consistent cough.

A pulmonologist told Korson he had pulmonary fibrosis, resulting in severe scarring of the lungs. The prognosis?

“Just like that, I went from having a kidney stone to being told I had two years left to live,” Korson said.

A biologist by training, Korson researched possible treatments and clinical trials, but he was unable to qualify for any due to his age — he is in his 60s. His condition continued to decline, and by January 2019 he needed an oxygen tank just to walk across a room.

“He was a pretty fit guy before,” said Mauricio Pipkin, M.D., an assistant professor in the UF College of Medicine’s surgery department and the lung surgeon on Korson’s case. “He went from being able to do karate to being bedridden and looking at a bilateral lung transplant.”

Soon, Korson had something new to worry about. Following a liver biopsy in December 2019, his team detected an advanced stage of cirrhosis, which causes scar tissue to steadily replace healthy liver cells and eventually halt liver function.

Without a new liver, Korson’s body would not be able to tolerate the double-lung transplant he urgently needed. He was staring at the prospect of needing an exceedingly rare and complex surgical procedure.

“My physicians told me this would be a difficult procedure, and that UF Health would be the best place to have it done,” Korson said.

But it would also be their first.

A team of MVPs

Korson’s liver surgeon, Beduschi, is one of the many reasons UF Health is on its way to becoming a multiorgan transplant hub, and why Korson was able to receive the inaugural double-organ surgery in the first place. 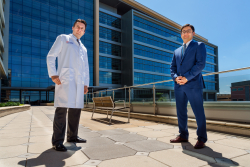 A recent addition to the division of transplantation and hepatobiliary surgery and a professor in the UF College of Medicine’s surgery department, Beduschi is one of a few experts around the world in multiviscerals and other types of multiorgan transplants.

Admittedly, he does play favorites. His fascination with the liver began at the Lutheran University medical school in the south of Brazil.

“I fell in love with its anatomy,” Beduschi said. “It’s a vital, complex and essential organ.”

“My first day there I watched a living donor transplant,” Beduschi recalled.

During a living-donor liver transplant, a piece of liver from a healthy individual is removed and placed into someone whose liver is no longer working as it should.

“Since then, I haven’t wanted to do anything else,” Beduschi said.

A successful double-lung and liver transplant is a major procedure that requires both lung and liver teams to be performing at an expert level and beyond, said Tiago Machuca, M.D., Ph.D., chief of the division of thoracic surgery and surgical director of lung transplantation.

According to the most recent Scientific Registry for Transplant Recipients report, the UF lung transplant program boasts the highest one year survival (96%) among all mid to large size programs in the country. For additional metrics like waitlist survival and time to transplant, the program does significantly better than the national average.

There are more than 60 lung transplant programs in the country, and outcomes of this rigor are only achieved by one other program.

In February 2020, Korson drove up to Gainesville for an overview of the transplant process and ended up being hospitalized because of low blood oxygen levels. He had developed hematopulmonary syndrome and oxygen couldn’t travel to his liver, let alone the rest of his body. 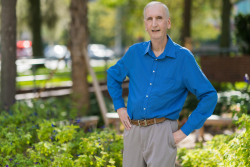 When it comes to lung transplants, a patient’s height is one of the factors that determines what kind of lung that transplant teams seek. At 6 feet, 3 inches tall, Korson towered over most, which made it harder for a good match to be found.

“We’ve developed procedures for lung bisections that enable lung transplants for patients of shorter stature,” said Machuca, who spearheads the lung transplant program that garners referrals from states away. “But for taller patients, you need a donor of similar stature.”

After more than 90 days in the hospital, Korson underwent transplant surgery on April 25. Twelve hours later, he emerged with two new lungs and a liver, as well as a renewed life expectancy of 20 years. All the organs came from a single donor, minimizing chances of rejection.

Korson’s road to recovery has been steady. Although he lost 50 pounds due to his illness, he’s since regained 11 and expects to be back to normal weight by Christmas. For now, he compares his appearance to a shar-pei, “lots of extra skin and wrinkles.”

He takes 21 medications twice a day, putting them in a candy dish for both easy access and levity.

The final step of his journey involved the removal of three kidney stones, which were removed at UF Health in August to lower the chances of infection that could endanger the transplants. Unlike his first kidney stone procedure, this one led to nothing but feeling better.

Fittingly, the first-ever double-lung and liver transplant patient at UF Health calls himself “an eternal optimist.”

Dorothy Hagmajer joined the UF Health staff in October 2019 as a science writer covering the Congenital Heart Center and the Department of Surgery in the College of Medicine. Previously,... END_OF_DOCUMENT_TOKEN_TO_BE_REPLACED