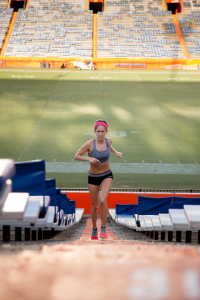 It’s so obvious that exercise is a healthy habit that it almost goes without saying. Scientists have known for years that physical activity lowers the risk of cancer, heart disease, stroke and diabetes, among other benefits.

What might come as a surprise is that researchers still don’t know why being physically fit is beneficial, especially on a molecular level.

A massive, first-of-its-kind study to map out those molecular changes reached a milestone this month as a group of 25 universities and research centers across the nation, including the University of Florida, published its first major joint paper. After several years of work, the Molecular Transducers of Physical Activity Consortium, or MoTrPAC, published a paper in the journal Cell that outlines the investigation’s organization and clinical study protocols.

It’s a major step for the $170 million study, funded by the National Institutes of Health, or NIH, that combines both preclinical and clinical studies, with an expected enrollment of up to 2,600 participants. (Recruitment is currently paused because of the COVID-19 pandemic.)

“This is a very complex project,” said Marco Pahor, M.D., director of the UF Institute on Aging and chair of the UF College of Medicine’s department of aging and geriatric research, part of UF Health. “It’s never been attempted to try and put together such a broad range and array of competencies. We all speak different scientific languages. We’ve been working for three years to get together a common protocol on which everyone agrees. It’s a landmark paper.”

In conjunction with scientists at Wake Forest University and the University of Vermont, Pahor leads the consortium’s coordinating center under a grant totaling $9.4 million. Karyn Esser, Ph.D., associate program director of the UF Institute of Myology, was awarded $2.2 million to lead one of MoTrPAC’s preclinical animal study sites. Other preclinical sites are the University of Iowa and the Joslin Diabetes Center in Boston. Esser, a professor in the UF College of Medicine’s department of physiology and functional genomics, said MoTrPAC animal studies already are far along.

The study is examining the effects of exercise on humans in the short term and over time.

In ongoing animal studies, scientists are examining the impact of exercise on more than 17 organs, including the heart, brain, kidneys and other tissues.

“The idea is that exercise is resulting in a systemic effect,” said Esser. “And these things don’t work in isolation. These cells and tissues are all talking to each other. This study has the potential to uncover these systemwide beneficial effects.”

Esser said a “tremendous strength” of MoTrPAC is that it combines preclinical animal and human clinical trials. The results from each are equally important and address different scientific questions, she said.

Knowing how exercise changes chemical molecules in the body could eventually lead to more targeted types of physical activity and perhaps even pharmaceuticals that might mimic some of the changes exercises brings about in the body.

“The metabolic pathways can perhaps be modulated pharmacologically or hormonally to mimic exercise to produce benefits in people who cannot exercise or don’t want to,” Pahor said.

Eleven clinical sites across the country, 10 for adults and one for those under 18 years old, were recruiting people from diverse racial and ethnic groups until the pandemic hit. They will examine how molecular signals are altered following changes in exercise patterns.

NIH officials, who call the study the largest research program of its kind, noted the large study size is meant to account for person-to-person variation, and to reveal differences based on demographics like age, race and gender.

“MoTrPAC was launched to fill an important gap in exercise research,” said NIH Director Francis S. Collins, M.D., Ph.D. “It shifts focus from a specific organ or disease to a fundamental understanding of exercise at the molecular level — an understanding that may lead to personalized, prescribed exercise regimens based on an individual’s needs and traits.”

NIH officials said the data from the study will be made available to researchers worldwide to bring new perspectives to the topic.

This work was conducted as part of the Molecular Transducers of Physical Activity Consortium funded by the NIH under award numbers U24AR071113 and U01AG055137.

Bill Levesque joined the UF Health staff in May 2017 as a science writer covering the Institute on Aging and research of faculty physicians in the College of Medicine. He... END_OF_DOCUMENT_TOKEN_TO_BE_REPLACED