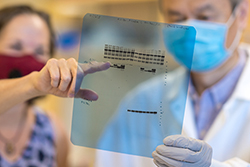 University of Florida neuroscientists showed in a mouse-model study that metformin, a widely prescribed drug approved by the U.S. Food and Drug Administration to treat Type 2 diabetes, reduces levels of specific mutant proteins central to the most common genetic form of ALS and frontotemporal dementia, or FTD, two intractable neurodegenerative diseases.

The study, published today in the Proceedings of the National Academy of Sciences, or PNAS, paves the way for additional research into possible future treatments, not only for the specific type of ALS and FTD linked to a mutation in the C9orf72 gene but many other neurological diseases caused by similar so-called “repeat expansion” mutations, the researchers said.

Furthermore, the Ranum lab has shown that these proteins trigger motor neuron loss and other characteristics of ALS and FTD in a mouse model.

“We’ve shown in mice that the drug reduces the levels of RAN proteins and that neurons in the brain and spinal cord do better,” said Ranum, director of UF’s Center for NeuroGenetics and the Kitzman Family Professor of Molecular Genetics and Microbiology. “Mouse behavior is improved, the way the mice walk is improved, inflammation in the brain is reduced and the survival of key motor neurons, which normally die in the disease, is increased with drug treatment.”

In an accompanying editorial in PNAS, Nobel Prize winner Michael Rosbash, Ph.D., wrote that the research “has implications for a much larger family of more than 50 microsatellite expansions diseases, which include Huntington disease, myotonic dystrophy, and a number of spinocerebellar ataxias.”

Rosbash, a Brandeis University geneticist who won the Nobel Prize in 2017 for his research on circadian rhythms, wrote: “Although a positive impact of metformin on neurodegenerative disease models, including dominant repeat expansion models, is not without precedent, the exciting feature of this paper is the intersection between its mechanistic advances and the impressive benefit afforded by metformin in ameliorating the effects of C9orf72-mediated ALS.”

The next step to confirm the benefits shown in the animal model is a human clinical trial. Ranum, in collaboration with UF scientists James Wymer, M.D., a professor of neurology; Emily Plowman, Ph.D., an associate professor of speech, language and hearing sciences; David Vaillancourt, Ph.D., a professor and chair of the department of applied physiology & kinesiology; and Timothy Garrett, Ph.D., an associate professor of pathology, immunology and laboratory medicine, initiated an open-label Phase 2 clinical trial in January to test whether metformin is safe for patients with C9orf72 ALS and whether the drug will reduce the levels of RAN proteins in patients. In an “open-label” trial, all patients receive the drug. If successful, the next step would be to run a larger, placebo-controlled trial, Ranum said.

Despite some delays forced by the coronavirus pandemic, Ranum and her team at the UF College of Medicine’s Center for NeuroGenetics are encouraged by the opportunity to test an already on-market drug with a strong safety record as a prospective new avenue to treat the disease by targeting the pathological proteins produced by the C9orf72 mutation, she said.

ALS, often called Lou Gehrig’s disease, is a progressive neurodegenerative disorder involving upper and lower motor neuron loss, eventually leading to paralysis. Both ALS and FTD can be caused by mutations in many different genes, but the C9orf72 gene mutation is the most common known genetic cause of both ALS and FTD.

Ranum said she got the idea to test metformin after hearing Sonenberg, a longtime collaborator, present a seminar about his 2017 discovery of metformin benefits in a mouse model of Fragile X syndrome, a disease involving a missing protein and a different disease mechanism than C9orf72 ALS. She asked Zu, a research assistant professor who works in her lab, to test metformin in tissue culture experiments to see if the drug would have any effect on lowering RAN protein levels.

“I thought it was a long shot but worth a try,” Ranum said.

The team went on to test and show that the drug inhibits a pathway that in healthy people and animals serves as a viral defense mechanism.

Ranum said it is important to emphasize that this approach is thought to work for this particular genetic form of ALS and FTD. A previous study reported that metformin did not show benefits in mice with a different genetic type of ALS that does not produce RAN proteins.

“Usually when you find a prospective treatment, it’s not an FDA-approved drug, and there’s a long road ahead of you to try to get lab discoveries to the stage where they can be tested in human patients,” Ranum said. “With metformin, we have something right now that can be tested to see if it will lower RAN proteins in humans, and we can do the trial to see if it improves the disease.”

Metformin is approved by the FDA to control high blood sugar in patients with Type 2 diabetes. A common side effect of metformin in susceptible people is diarrhea, and a rare side effect is lactic acidosis, a serious condition that can occur in patients who suffer from renal failure, said Sonenberg. In patients who have diabetes, metformin can possibly aggravate ketoacidosis, a rare but serious condition that results from having high blood sugar levels for too long.

On the whole, he said, metformin has a strong safety record and is inexpensive and readily available.

“The most stunning medical aspect of this research to me is that metformin, which is one of the most well-tolerated drugs used for more than five decades by approximately 180 million people every day for diabetes, could also potentially ameliorate symptoms of ALS and other microsatellite expansion diseases,” Sonenberg said.

The new Phase 2 clinical trial seeks to test the safety of metformin in C9orf72 ALS patients and determine whether metformin reduces levels of RAN proteins in the cerebral spinal fluid of study participants, Ranum said.

“We’re excited about the potential significance of these findings because they could address a fundamental mechanism of many different types of repeat expansion diseases,” Ranum said. “Usually when you get a breakthrough, you find something that could work for one disease. But this has potential applicability for a whole group of diseases.”

Michelle Koidin Jaffee is the Science Writer for the McKnight Brain Institute of the University of Florida. In more than 20 years as a journalist, she worked as a reporter... END_OF_DOCUMENT_TOKEN_TO_BE_REPLACED