UF Health researchers developing next generation of tools to track diabetes in children, teens in Florida 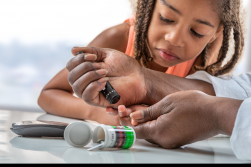 As concerns grow about the rising incidence of diabetes in children and teenagers nationwide, a team of UF Health researchers is developing a quicker, more accurate and cost-effective way to track affected youths in Florida by leveraging electronic health records in a statewide database.

With a five-year, $1.2 million grant from the Centers for Disease Control and Prevention, a team led by Jiang Bian, Ph.D., will use the OneFlorida Data Trust — a database of electronic health records from more than 15 million Floridians in all 67 counties — to determine how many children and teenagers in Florida are diagnosed with diabetes per year and how many of them have access to quality care.

According to the CDC, about 34 million Americans have diabetes, a chronic condition related to insulin, a hormone produced by the pancreas that helps the body use energy from food. People with diabetes either don’t produce enough insulin or can’t use the insulin they produce, leading to high blood sugar levels. Over time, uncontrolled blood sugar levels can lead to heart and circulatory problems, kidney disease, eye disease and other complications.

The southeastern United States has some of the nation’s highest rates of adults with diabetes, and the region is often referred to by experts as the “Diabetes Belt.” But information about diabetes incidence in children and teenagers is scant, especially for Florida.

“Diabetes data and surveillance studies that track the rate of diabetes in children and teens are limited in the United States, especially in the Southeast, where diabetes is the most prevalent,” said Bian, an associate professor in the UF College of Medicine’s department of health outcomes and biomedical informatics.

Only one long-term national study on diabetes incidence in young patients is currently underway — the CDC’s SEARCH for Diabetes in Youth Study, or SEARCH. The study, which began in 2002, monitors the number of children and adolescents affected by diabetes and the number of youths newly diagnosed over time.

Bian said the methods used in SEARCH are labor-intensive and expensive, and the data collected is limited to patients from only 10 states. “Florida, which is one of the most populous and ethnically diverse states in America, is not included in that study,” he said.

“These alarming trends call for a more effective way to monitor the prevalence and onset of diabetes in children and teens,” Bian said.

Bian said that the proliferation of data from a variety of sources — including electronic health records, health insurance claims, vital statistics and the U.S. Census — now makes it possible for researchers to develop innovative, more accurate and cost-effective ways to leverage the data and monitor health trends like this one.

He added that patient names and any other identifying information about individuals in electronic health records are not included in any of the study data. “We are using computer algorithms and data to track the prevalence of diabetes in a large and diverse population of people, not individuals,” he said.

One important innovation for this research project is the use of clinical natural language processing, an application of artificial intelligence that enables computers to access and use the information in clinical notes written by physicians.

Clinical notes contain crucial information about social and behavioral determinants of health — individual health behaviors, such as smoking and alcohol consumption, along with other factors, such as income and education level — that could contribute to the development of diabetes.

“Social and behavioral determinants of health can help researchers identify and address ethnic-racial and geographic disparities among children and adolescents affected by diabetes,” Bian said.

The team plans to examine disparities in diabetes control, treatment, health-care access and use, and complications among children and adolescents with diabetes. They will also map geographic hotspots in Florida with higher rates of diabetes to help state agencies and other stakeholders identify places in the state where more resources and support are needed.

Finally, the team plans to work closely with the CDC and the OneFlorida Coordinating Center to share their findings with other researchers, clinicians, state agencies and the public.

“We’re confident that the framework we are developing to track diabetes prevalence in Florida’s youth using electronic health records and other data will be useful for monitoring other diseases like COVID-19 and cancer nationwide,” Bian said.

Co-principal investigators in the UF study include Yi Guo, Ph.D., an assistant professor in the department of health outcomes and biomedical informatics; Elizabeth A. Shenkman, Ph.D., chair of the department and principal investigator of the OneFlorida Clinical Research Consortium; and Hui Shao, M.D., Ph.D., an assistant professor in the UF College of Pharmacy’s department of pharmaceutical outcomes & policy.