UF Health screening patients in what might be largest fatty liver study of its kind in the U.S. 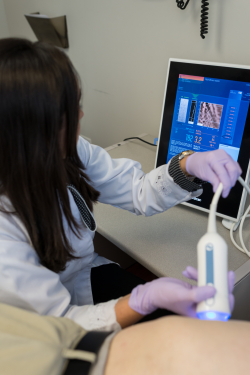 It’s a potential killer. And many of the people who are most susceptible to the disease don’t even know it exists. Physicians remain uncertain of its prevalence.

It’s liver scarring from inflammation caused by a fatty liver.

University of Florida Health researchers have been awarded a $2.3 million National Institutes of Health grant to screen more than 1,000 patients at health center outpatient clinics over the next two-and-a-half years to determine the pervasiveness of the condition. The study is thought to be the largest of its kind ever undertaken in the United States.

The UF Health study seeks to scan the livers of 525 people with Type 2 diabetes to detect the presence of scarring. Another 525 people in a control group of people without diabetes also will be scanned.

Nonalcoholic fatty liver disease, or NAFLD, is a common side effect of Type 2 diabetes, particularly in those who are obese. It often causes damaging liver inflammation that can push patients down a road that could ultimately lead to cirrhosis, liver failure and death.

“This study will be designed to offer the first unbiased estimate of how many people with Type 2 diabetes are just walking out there progressively diving into cirrhosis without even knowing it,” said Kenneth Cusi, M.D., the study’s principal investigator and chief of the UF College of Medicine’s division of endocrinology, diabetes and metabolism. “We know it’s a big problem. But it’s being missed.”

The results will help inform national policy on guidelines for screening people with diabetes for what is possibly the leading cause of liver transplantation in the nation.

Battling the inflammation that leads to scarring is impossible unless patients and their doctors are aware, Cusi said.

“The ultimate goal is to diagnoses scarring — the medical term is fibrosis — at an early stage to prevent people from developing cirrhosis,” Cusi said. “We’re trying to identify these problems before they’re unfixable. Once someone has cirrhosis, there isn’t a whole lot you can do.”

Preliminary research that was more limited in scope showed that 70% of 561 people with Type 2 diabetes who were screened had a fatty liver on imaging; 21% had some degree of liver fibrosis and 9% had severe fibrosis or cirrhosis, according to a study co-authored by Cusi and other UF Health researchers published in Diabetes Care, the official journal of the American Diabetes Association.

In the current study, patients who are screened for liver inflammation and fibrosis at outpatient primary care clinics, including general internal medicine, family medicine and endocrinology, will be assessed, if they agree to participate and meet eligibility requirements.

Half the patients found to have a liver scarring will be offered a drug called pioglitazone, which has shown promise in curbing the progression of the disease, along with a diet and exercise regimen. Weight loss brought on by lifestyle changes is one of the primary ways to fight the accumulation of liver fat.

And half of patients will receive a placebo combined with lifestyle changes (up to a total of about 130 eligible volunteers).

In addition, all patients with diabetes will be tracked and monitored over time. Blood tests and imaging studies will be conducted on their liver to determine if the disease is progressing.

“We want to know what the factors are that make the disease get worse,” Cusi said. “We can then act in a more effective way moving forward.”

Research in this publication was supported by the National Institute of Diabetes and Digestive and Kidney Diseases of the NIH under award No. R01DK120331. The content is solely the responsibility of the authors and does not necessarily represent the official views of the NIH.

Bill Levesque joined the UF Health staff in May 2017 as a science writer covering the Institute on Aging and research of faculty physicians in the College of Medicine. He... END_OF_DOCUMENT_TOKEN_TO_BE_REPLACED