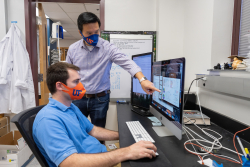 Building on previous findings that show a specific protein is associated with gut health, University of Florida researchers have discovered an intricate molecular mechanism that encodes a unique address system, identifying the route a certain type of immune cell takes to reach its final destination: the large intestine.

The findings shed light on the way the protein works to deliver cells associated with suppressing inflammation to the gut in mice and in humans, which may prove useful in combating inflammatory bowel disease, or IBD, and other intestinal disorders, in humans as well as in animals, said Liang Zhou, M.D., Ph.D. a professor in the UF College of Veterinary Medicine’s department of infectious diseases and immunology. Zhou is the corresponding author on the study, which was published in June in Science Immunology.

Zhou has studied the protein, an intracellular molecule known as aryl hydrocarbon receptor, or AHR, for years, intrigued by its potential for controlling complex cellular relationships within the body that affect disease. Although best known as a sensor for detecting environmental contaminants inside the body, AHR has unique aspects that have not been widely explored scientifically. For example, it has remained relatively unchanged genetically  over time across many different species, including nematodes, or worms, Zhou said.

“This means it should not have evolved to detect only man-made pollutants, as it appeared even before man appeared on the planet,” said Zhou, also a member of the UF Health Cancer Center. “We have long been interested in the receptor’s physiological function and how it responds to other stimuli, such as dietary compounds.”

Previously, it was not known how AHR modulates regulatory T cells, a subtype of white blood cells that play a key role in suppressing cell-mediated inflammation in the gut.

“But now we’ve found an address — a location mark,” Zhou said. “And more importantly, we have found potential ways to modify that address to deliver the cells to that location so they can act to suppress inflammation in the gut.”

The direct target of AHR is another protein, known as GPR15, also known as the HIV or simian immunodeficiency virus co-receptor. This protein is critical in the intestinal homing of regulatory T cells in mice and in humans, further suggesting a physiological role for AHR in intestinal tissue stability, the researchers said. Zhou’s longtime postdoctoral associate, Lifeng Xiong, Ph.D., first author on the paper, made that discovery.

“It is quite fascinating to discover how our immune system has evolved such an intricate address system that is regulated by AHR,” Xiong said.

Joseph Dean, M.S., a doctoral student in Zhou’s laboratory and a co-author on the paper, expanded on the practical significance of the finding.

“It’s what tells the T cells to go to the intestine, instead of to the spleen, or someplace else,” he said. “Using next-generation sequencing technology, we’ve found that AHR is directly responsible for regulating GPR15.”

Elaborating on the analogy of the address system, Zhou said that if GPR15 is the location mark, the envelope it is written on is the regulatory T cell, and AHR is the person who writes the address.

“This address system we’ve discovered is mediated by AHR and GPR15,” he said. “If you write that address on the envelope, the letter will be delivered to the right location — the large intestine.” 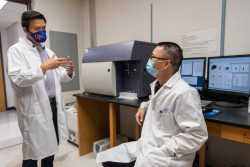 In the context of IBD or other intestinal diseases, promoting the delivery of the regulatory T cells into the gut would be a good thing, the researchers said. But they added that more research is needed to better understand the mechanism’s full promise and potential risks.

“We’ve discovered a route of delivery,” Zhou said. “But the AHR role is quite complicated; it can either suppress or activate a gene. We believe that if you activate AHR in the regulatory T cells, you can make them more functional. In IBD patients, this outcome is good, as we want to suppress inflammation. But in other context, enhanced regulatory T cells may not be a good thing, especially when our bodies are trying to combat a tumor or infection by enhancing immune responses.”

While Zhou’s team now knows that the AHR protein defines the gut location mark GPR15 on regulatory T cells, they don’t yet know how exactly the cells bearing that location mark get to their destination.

“Because of the GPR15 ‘written’ on it, it goes to the intestine. Initially, we were very cautious, as AHR plays many functions, in other words, can write different ‘addresses’,” Zhou said. “But this regulation of GPR15 is one of the key functions of AHR in these regulatory T cells.”

The Zhou lab has investigated several molecular candidates regulated by AHR that could deliver those cells to the gut, but the researchers believe GPR15 is one of the most important. To arrive at their findings, the researchers used high-throughput gene sequencing in mice, analyzing the entire genome to investigate AHR’s molecular behavior.

“Performing next-generation sequencing of the entire genome allows you to look at thousands of genes,” Dean said. “While AHR can regulate many genes, our analysis showed several angles that point to this key function of regulating GPR15.”

An interesting characteristic of AHR is its ability to be targeted by drugs or modified by diet or by bacteria in the gut, the researchers said. But even without genetic or pharmaceutical intervention, people seeking better intestinal health can reach that goal simply by modifying their diets to include more of the ligands, or compounds, known to activate AHR. Zhou said.

“It is very important to note that this address system regulated by AHR is well passed on from animals to humans as evidenced by evolution,” he said. “It offers an opportunity to develop new drugs to target AHR to treat diseases. But, I would also tell IBD patients, eat more vegetables, like broccoli and cabbage, which are high in the ligands that act like keys to unlock AHR.”

Zhou said his group’s findings are a direct outcome of fruitful collaborations among many people, including Marcus Mühlbauer, M.D., Ph.D., an assistant professor of gastroenterology in the UF College of Medicine and director of UF Health’s Inflammatory Bowel and Celiac Disease Program.

Sarah Carey, M.A., A.P.R., is director of communications at the University of Florida College of Veterinary Medicine, a job she has held since 1990. Sarah holds a master’s degree in... END_OF_DOCUMENT_TOKEN_TO_BE_REPLACED