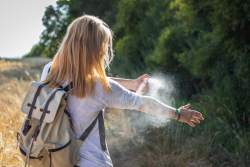 Summer is back, with warmer temperatures, longer days and … mosquitoes. When mosquitoes feast on humans, they can leave more than irritating bites behind. They can also carry Zika, West Nile virus and malaria.

The insect repellent N,N-diethyl-meta-toluamide, or DEET, is considered one of the most effective defenses against mosquitoes and ticks. It has been used since the 1940s, but questions linger among some consumers about its safety.

A new University of Florida study published this week in the American Journal of Tropical Medicine and Hygiene adds to the body of research demonstrating that DEET is safe for humans when used according to manufacturer instructions.

“DEET is one of the most widely used insect repellants in the U.S., yet the existing literature regarding DEET’s potential harmful impact to humans is mixed and is based mostly on case reports,” said the study’s lead author Zuhair Haleem, a Ph.D. student in health services research in the UF College of Public Health and Health Professions, part of UF Health. “This study is one of the few population-based assessments of the potential health effects of DEET.”

As an ingredient in insect repellent sprays, lotions and wipes applied to skin or clothing, DEET has been found to repel mosquitoes and ticks for an average of five hours at a 24% concentration. DEET was first introduced by the U.S. military in 1946 to protect soldiers stationed in mosquito-infested areas and expanded to commercial use in the 1950s. Concerns about DEET arose in the 1980s when cases of side effects, including skin irritation and seizures, were reported among people who had used DEET. However, in some of those cases, DEET was ingested or applied in very large quantities.

The U.S. Centers for Disease Control and Protection advises that the risk of health effects from DEET is low when used correctly and recommends use of products containing at least 20% DEET for protection against mosquito and tick bites and the illnesses they can carry, including West Nile virus and Lyme disease.

For the UF study, the team analyzed data from the National Health and Nutrition Examination Survey of 2015-2016. The survey combines interviews along with physical examinations to assess the health of Americans.

The team identified 1,200 adult participants whose urine samples contained traces of DEET. A small percentage of the chemical is absorbed through the skin and excreted in the urine within 24 hours. Next, the team analyzed several of the participants’ biomarkers, including immune, liver and kidney function, as well as systemic inflammation. They found no impact on these biomarkers among DEET users.

The results led Haleem to conclude, “Exposure to DEET does not appear to have a deleterious impact on human health.”

As climate change expands the range for tropical mosquitoes that carry some of the most potentially dangerous insect-borne diseases, it is more important than ever that we have prevention options that are safe and effective, said the study’s senior author Arch Mainous III, Ph.D., a professor and chair of the UF Department of Health Services Research, Management and Policy.

“This study provides some evidence that an effective recommended prevention strategy can be used safely and seems to have few negative effects on users’ health,” Mainous said. “As the geographic area of these diseases, which had been limited to the tropics, moves north, it is encouraging to see evidence that DEET can remain a key strategy for prevention.”

The researchers suggest that future studies of DEET’s impact on health outcomes include additional biomarkers to examine any association with chronic pulmonary obstructive disorder, heart disease, nervous system conditions and certain types of cancer, such as melanoma.

In addition to Haleem and Mainous, the study team included doctoral students Sandhya Yadav and Minor Cushion; Rebecca Tanner, a research coordinator in the UF Department of Health Services Research, Management and Policy; and Peter Carek, M.D., a professor and chair of the UF Department of Community Health and Family Medicine in the College of Medicine.

Jill Pease is the public relations director for the UF College of Public Health and Health Professions. She is responsible for developing public relations and communications strategies to promote the... END_OF_DOCUMENT_TOKEN_TO_BE_REPLACED