For more information on our ongoing response to COVID-19 in Gainesville, Jacksonville and Central Florida, visit our coronavirus website. END_OF_DOCUMENT_TOKEN_TO_BE_REPLACED

When a dog or cat is found dead or dying on the side of the road, many people assume the animal was hit by a vehicle. Without investigating, however, there is no way to really determine the cause of death or injury. 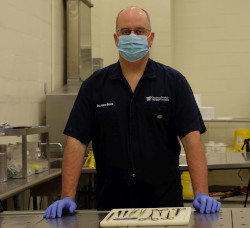 Learning what really happened to these animals and bringing justice to possible animal abusers is a focus of Adam Stern, D.V.M., a forensic pathologist in the University of Florida College of Veterinary Medicine. Two new programs Stern started this past year aim to do just that.

Stern’s “A Dog Has No Name” and “A Cat Has No Name” projects are collaborations with law enforcement authorities and forensic specialists at the UF Maples Center for Forensic Medicine to provide a way to identify and document the deaths of unclaimed dogs and cats. If a questionable animal death is suspected, cases findings are provided to the appropriate authorities, with the goal of prosecuting animal abuse perpetrators and bringing justice to the animals that were harmed.

“I’ve seen maybe a half-dozen cases where others have actually seen people dump dogs on the side of the road,” Stern said. “Some of them were abused. But no one really knows unless we look at them.”

With the recent COVID-19 pandemic, some areas have seen an increase in dumped animals, both alive and deceased, he added.

Stern examines unowned animals brought to the UF Small Animal Hospital that are either dead or needing to be euthanized. Anatomic pathology residents assist Stern, simultaneously learning how to perform forensic autopsies, and in some cases, other services, such as diagnostic imaging.

Underused techniques such as postmortem CT scans and even serology can be used to assess the possible presence of infectious diseases and could help correlate autopsy findings, he added.

“These animals all have an identity, and the premise behind this program and having it as a part of the forensic pathology service is that if we do find a case in which we strongly suspect animal abuse, the evidence will have been collected and can be used in a potential prosecution,” Stern said.

In addition to cases from the small animal hospital, Stern has also received animals from law enforcement or animal control services around Florida. To date, more than 100 dogs and cats have been examined, some from as far away as California.

These services are provided free of charge as the programs rely on financial support from donors to cover costs.

“People who contact us might say we have a dog that’s been found dead in a park, or on the side of the road, and we think it might fit your program,” Stern said. “They’re actually very excited to be able to send these dogs and cats over.”

Stern has already identified several cases of dogs and cats that showed evidence of animal cruelty. How did he know?

“Because the dogs had projectiles in them,” Stern said. “These were air gun pellets, and the death was definitely attributed to these projectile injuries. We see that there could be a potential crime involved, then report it to law enforcement authorities and let them do their investigating.”

Stern looks at the dogs and cats that are brought to him as forgotten, unlike the stray or shelter animals for whom pet rescuers and animal advocates work to find new homes.

“You can’t save those animals that aren’t with us anymore,” he said. “As a pathologist, I don’t typically save animals. But we can still get justice for these animals in the end, if it’s necessary.”

Sarah Carey, M.A., A.P.R., is director of communications at the University of Florida College of Veterinary Medicine, a job she has held since 1990. Sarah holds a master’s degree in... END_OF_DOCUMENT_TOKEN_TO_BE_REPLACED