To solve the elusive medical mystery of why many adults have both high blood pressure and depression, University of Florida Health researchers took a long, in-depth look at one suspected culprit: gut bacteria.

The gut microbiome affects physiology and molecular events throughout the body, including parts of the brain that control blood pressure and depression, newly published findings show. 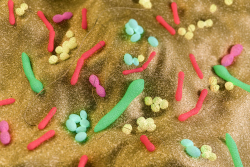 The gut’s role in the two prevalent, chronic conditions was first explained by a trio of UF Health researchers in September 2019. Now, using a branch of artificial intelligence known as machine learning, the researchers have zeroed in on the specific bacteria suspected of causing depression coupled with high blood pressure.

It’s a crucial step toward the long-term goal of improving health management and developing novel treatments based on the analysis and manipulation of gut bacteria, the researchers said. The two conditions are sometimes so intertwined it has also led them to coin a new phrase: depressive hypertension. The findings were published recently in the American Heart Journal.

High blood pressure and depression are interrelated in many people, yet unlinked in others. Cardiologists and psychiatrists don’t know why. That can make diagnosis and treatment challenging, said Bruce R. Stevens, Ph.D., a professor of physiology and functional genomics in the UF College of Medicine, and the study's lead author.

Stevens and his colleagues used a novel machine learning approach to develop a much more sophisticated DNA analysis of gut bacteria. Mohan K. Raizada, Ph.D., a co-author of the study and a distinguished professor emeritus of physiology and functional genomics in the UF College of Medicine, suspected that people with depression and hypertension would have unique gut microbiomes. To establish their findings, the researchers focused on four groups of people — those with high blood pressure and depression, those who only had high blood pressure, those who only had depression, and healthy people.

Stevens deployed machine learning to make sense of myriad data points about the patients and their gut bacteria. The computer analysis filtered out statistically irrelevant “noise” and distilled the data into a coherent picture. Without machine learning, Stevens said the mind-boggling mountain of raw data would have been incomprehensible to the human brain.

“Because the patients have unique gut microbes, we knew we could use machine learning to identify them. The computer could distinguish the patients’ health conditions based on their personal microbiome,” Stevens said.

Raizada and Carl J. Pepine, M.D., a co-author of the study and a professor in the UF College of Medicine’s department of medicine, said gut microbe analysis and manipulation holds significant promise for treating depression, hypertension or both. For cardiologists and psychiatrists, analyzing gut bacteria may prove to be a reliable shortcut to finding the most effective therapies or recommendations for improving lifestyles.

A gut bacteria analysis could someday be used to quickly predict which patients will respond to particular medications in the manner of personalized medicine, Raizada said. Pepine added, “It would certainly take us forward from the approach where we try a drug to lower blood pressure or treat depression and then wait weeks or months for a possible response.”

The overwhelming prevalence of hypertension and depression makes the search for new diagnoses and treatments an imperative, Pepine said. High blood pressure is the most modifiable risk factor for cardiovascular disease and a host of other disorders. Collectively, hypertension and depression impact more than half of adults in most industrialized countries, according to Pepine.

“We’re targeting and addressing a huge problem,” he said.

Next, the team is studying the potential benefits of anti-inflammatory drugs that can freely cross the highly selective blood-brain barrier. Their aim is to counteract depressive-hypertension effects of certain undesirable gut bacteria species. They have shown some effectiveness in preclinical models and Pepine would like to see these tested in humans in the future.

While much more research is needed to develop new gut-based therapies, Stevens says this much holds true: The human body is actually a “meta-organism” — a complex, intertwined system of trillions of human and bacterial cells. Likewise, the gastrointestinal tract is a novel target for preventing, diagnosing and treating hypertension, depression or both.

“This is not just about the gut, the heart or the brain alone,” Stevens said. “Depressive-hypertension is a three-dimensional symphony of these three organs.”

Doug Bennett joined the UF Health staff in January 2015 as a science writer and editor. His topic areas include anatomy; biochemistry and molecular biology; molecular genetics and microbiology; pathology,... END_OF_DOCUMENT_TOKEN_TO_BE_REPLACED