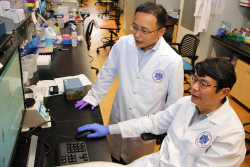 University of Florida researchers have developed a new compound that simultaneously attacks two key proteins critical for a cancer cell’s survival, a discovery that could aid in the development of more effective leukemia, lung and colon cancer drugs.

In a study published Nov. 25 in Nature Communications, UF College of Pharmacy researchers , Guangrong Zheng and Yaxia Yuan, along with a team of other scientists, reported the development of the first BCL-xL and BCL-2 PROTAC dual-degrading compound.

The compound acts on a pair of proteins in the B-cell lymphoma 2 family that fuel the growth of malignant cancer cells and strengthen their resistance to drug therapies. The proteins shield tumor cells and protect them from death.

“Some cancer cells solely depend upon these proteins for survival,” said Zhou, M.D., a professor of pharmacodynamics and the Henry E. Innes Professorship of Cancer Research at UF Health. “If we can eliminate the BCL-xL and BCL-2 proteins, then we can destroy the tumor cells directly or make them more susceptible to conventional cancer treatments.”

The new anticancer compound, in the early stages of testing, was developed using technology that relies on proteolysis targeting chimeras, or PROTACs, which are small molecules that help cells break down cancer-promoting proteins.

“It is still relatively new technology and there are only a few PROTACs in clinical trial,” said Zhou, also co-leader of the UF Health Cancer Center’s Mechanisms of Oncogenesis research program and associate director for translational and drug development. “We are among the first groups to demonstrate that PROTAC technology can improve anti-tumor activity and also reduce toxicity.”

For years, scientists have studied ways to weaken the proteins individually and through dual-degrading compounds. In many cases, the toxicity levels were too high to be effective. UF researchers used computer modeling and chemical synthesis to overcome these barriers and develop the latest PROTAC with therapeutic potential.

The compound’s development spanned more than three years and represents the second generation of PROTACs developed in Zhou and Zheng’s lab. In spring 2021, the U.S. Food and Drug Administration approved DT2216 as the first BCL-xL PROTAC anticancer drug to proceed to clinical trial.

“Some cancer cells solely depend upon BCL-xL for survival, and DT2216 was designed to target this single protein,” said Zheng, Ph.D., an associate professor of medicinal chemistry. “Our new generation PROTAC has the potential to be an even more effective cancer drug, because we have broadened the spectrum of cancer cells to target, and we can kill those cancer cells that depend upon both proteins for survival.”

UF researchers hope to start preclinical studies on the compound in the next 12 to 18 months and estimate it may be two to three years before the compound can be tested in a human clinical trial.

Other researchers from UF, including co-first authors Dongwen Lyu, Ph.D. and Pratik Pal, Ph.D., contributed to the study, along with scientists from M.D. Anderson Cancer Center and the University of Texas Health Science Center at San Antonio.

Matt Splett is director of communications for the College of Pharmacy. He leads efforts to enhance the college’s brand image through traditional and new media initiatives and serves as executive... END_OF_DOCUMENT_TOKEN_TO_BE_REPLACED