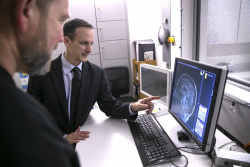 University of Florida researchers will broadly test a new artificial intelligence tool aimed at distinguishing the precise diagnosis for patients with early Parkinson’s disease or two related but distinct Parkinson’s-like syndromes under a new $5 million grant from the National Institutes of Health announced March 18.

The three distinct neurodegenerative disorders — Parkinson’s disease; multiple system atrophy Parkinsonian variant, or MSAp; and progressive supranuclear palsy, or PSP — can be difficult to differentiate because they share overlapping motor and non-motor features, such as changes in gait. But they also have important differences in pathology and prognosis, and obtaining an accurate diagnosis is key to determining the best possible treatment for patients as well as developing improved therapies of the future. Previous research has shown that accuracy of diagnosis in early Parkinson’s can be as low as 58%, and more than half of misdiagnosed patients actually have one of the two variants.

Testing of the new AI tool, which will include MRI images from 315 patients at 21 sites across North America, builds upon more than a decade of research in the laboratory of David Vaillancourt, Ph.D., a professor and chair of the UF College of Health & Human Performance’s department of applied physiology and kinesiology, whose work is focused on improving the lives of more than 6 million people with Parkinson’s disease and Parkinson’s-like syndromes.

To differentiate between the forms of Parkinsonism, Vaillancourt’s lab has developed a novel, noninvasive biomarker technique using diffusion-weighted MRI, which measures how water molecules diffuse in the brain and helps identify where neurodegeneration is occurring. Vaillancourt’s team demonstrated the effectiveness of the technique in an international, 1,002-patient study published in The Lancet Digital Health in 2019.

Under the new NIH grant, principal investigators Vaillancourt; Angelos Barmpoutis, Ph.D.; and Michael Okun, M.D., will create a new web-based software tool that they will test within the Parkinson Study Group, a large North American network of clinician-researchers evaluating Phase 2 and Phase 3 clinical trials in Parkinsonism. Patient recruitment at 19 U.S. sites and two in Canada is scheduled to begin by summer and continue for two years.

“What is new is the use of artificial intelligence for predicting the type of Parkinsonism,” said Barmpoutis, an associate professor and coordinator of research and technology at UF’s Digital Worlds Institute. “In order to train a computer to identify Parkinsonism, we need to teach it using a lot of data. One solution for that is crowd sourcing — going around to different institutes that have patients and asking them to contribute to this big project. We try to collect as many data points by creating what I believe is one of the largest databases for this particular type of diagnosis.”

Physicians at the 21 study sites, led by UF Health, will upload MRI images from a baseline visit with each participating patient, and the algorithm will compute a diagnosis and determine if it matches the diagnosis received in clinic, Vaillancourt said. In addition, a UF neurologist and University of Chicago neurologist who specialize in movement disorders will assess video of each patient and their clinical background to evaluate the diagnosis. Each participant will then be reevaluated clinically 18 months later to confirm their diagnosis.

“This isn’t going to replace the physician’s decision making; it’s just meant to be another tool in their toolkit,” Vaillancourt said. “The goal is that clinical trials will be better because they will focus on specific variants. Patients will be able to know their diagnosis earlier.”

Ultimately, the team hopes to gain approval from the U.S. Food and Drug Administration for use of the tool as a clinically approved diagnostic marker to adequately distinguish between forms of Parkinsonism.

“One of the critical needs in the Parkinson’s field is to be able to accurately diagnose patients in the early stages, including differentiating between types of Parkinsonisms,” said Okun, chair of UF’s department of neurology and executive director of the Norman Fixel Institute for Neurological Diseases at UF Health. “This project is a huge step forward as, if successful, we will have developed a reliable marker for different forms of Parkinsonism. We will be able to use this marker to test new therapies stuck in the development pipeline.”

Added Okun, national medical director of the Parkinson’s Foundation: “This will hopefully translate into better therapies available sooner for those with Parkinson’s disease and Parkinsonisms.”

Michelle Koidin Jaffee is the Science Writer for the McKnight Brain Institute of the University of Florida. In more than 20 years as a journalist, she worked as a reporter... END_OF_DOCUMENT_TOKEN_TO_BE_REPLACED