Physicians have long recognized that women with denser breasts are at increased risk of invasive breast cancer, heightening the importance of mammography screenings.

A paucity of data, however, established such a risk in women age 65 and older, and virtually no data existed for women age 75 and older, a University of Florida Health researcher sa

A large study led by a UF Health population scientist examined data from more than 193,000 women age 65 and older, including more than 70,000 who were at least 75, and found a positive association between breast density and breast cancer risk.

The paper is published today in JAMA Network Open, an online open access journal published by the American Medical Association.

The study fills a gap of information with possible implications on the decision-making of older women considering a breast cancer screening mammography, said the study’s senior author, Dejana Braithwaite, Ph.D, the associate director of population sciences at the UF Health Cancer Center and a professor in the UF Institute on Aging.

Right now, the U.S. Preventive Services Task Force, or USPSTF, an independent panel of national experts on disease prevention and evidence-based medicine, does not recommend for or against mammography screening after age 75. The task force says evidence to weigh risk versus benefit has been insufficient for a definitive recommendation.

“Our goal is to develop the evidence that helps personalize breast cancer screening for older women,” said Braithwaite. “Older women who are in good health and have dense breasts may consider a screening mammogram even as they age beyond the screening recommendations for average-risk women.”

The USPSTF recommends a mammogram every two years for women in the 50 to 74 age group. American Cancer Society recommendations are slightly different, with annual mammograms suggested for women 45 and older, and then biennially after age 55 for women who are in good health.

Physicians note that not all older women would benefit from screening mammography, especially those with serious medical conditions.

“This study provides evidence that breast density remains an important risk factor in older women and should be included in risk prediction models that also consider life expectancy to help identify women who may benefit most from continued screening,” said study co-author Diana L. Miglioretti, Ph.D., a researcher at the University of California, Davis.

The study analyzed data from the Breast Cancer Surveillance Consortium and specifically examined breast density as a breast cancer risk factor in two groups of women — those ages 65 to 74 and those who are 75 and older. Data were collected from women in New Hampshire, Vermont, North Carolina, the San Francisco area, Washington, New Mexico and Colorado. 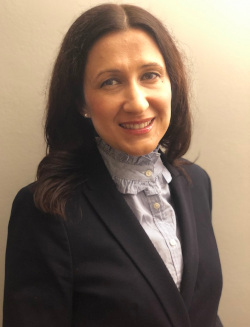 “Our findings are generalizable to the U.S. population because we collected data from women in seven different surveillance registries across the country,” said Braithwaite, who is also a faculty member in the UF College of Medicine’s and UF College of Public Health and Health Professions’ department of epidemiology.

While researchers found that age is the strongest risk factor for breast cancer, women with dense breasts have a higher risk of breast cancer than women with fatty breasts. And the risk increases with increasing breast density. For example, in women 65 to 74 years old, the team found an increased five-year risk of breast cancer that ranged from 11.3 per 1,000 women in groups with fatty breasts to 23.7 per 1,000 women in groups with dense breasts.

“The 30% to 32% of older women with high breast density should discuss with their health care provider whether having high breast density sufficiently increases their risk to warrant ongoing screening mammography,” said Karla Kerlikowske, M.D., a co-author and a member of the University of California, San Francisco’s Helen Diller Family Comprehensive Cancer Center.

Bill Levesque joined the UF Health staff in May 2017 as a science writer covering the Institute on Aging and research of faculty physicians in the College of Medicine. He... END_OF_DOCUMENT_TOKEN_TO_BE_REPLACED