No pain, no gain for people with peripheral artery disease exercising to stay mobile

It’s the kind of maddening conundrum that often faces people with peripheral artery disease, or PAD, a condition involving a narrowing of arteries that restricts blood flow to the limbs.
Rigorous walking is usually recommended as the only useful therapy to maintain and improve mobility for those with PAD. But a stroll often causes severe leg pain and discomfort, which leads to less walking.

Might people with PAD ease off a little bit and walk at a slower, painless pace while still benefiting from the exercise? 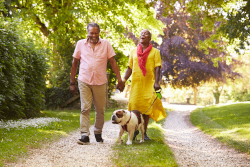 A new study co-authored by two University of Florida Health and UF Institute on Aging researchers provided an emphatic answer: No pain, no gain.

A randomized, multi-institutional clinical trial involving about 300 patients with PAD found those who walked briskly with pain were able to dramatically improve their walking ability compared with those who walked at a slower, pain-free pace. In fact, the group walking at a more leisurely pace showed no greater improvement in mobility than a control group who didn’t walk at all.

Even though this slower group could walk for twice as long a period of time as the faster because of the absence of pain, they nonetheless showed no improvement.

“High-intensity walking is a treatment, and sadly, not all treatments are comfortable,” said Todd Manini, Ph.D., an Institute on Aging faculty member and a professor in the UF College of Medicine’s department of aging and geriatric research. “Nobody wants to push themselves to the point where they feel discomfort. This study was the test of the idea that, if you don’t feel that discomfort, then you aren’t going to get the benefit.”

The study holds important implications for the estimated 8.5 million Americans and 250 million worldwide who have PAD involving their lower extremities and, researchers said, provides compelling evidence that patients should avoid slowing down to improve their comfort level.

“This study is a huge step forward,” said Christiaan Leeuwenburgh, Ph.D., a faculty member in the Institute on Aging and a professor in the UF College of Medicine’s department of aging and geriatric research. “Physicians sometimes say, ‘Hey, don’t go over the threshold of pain. Slow down.’ But no pain, no gain. That’s what you have to do.”

Participants in the study, published April 6 in the Journal of the American Medical Association, were separated into three groups — high-intensity walking, low-intensity and a control group that did not exercise. All had been diagnosed with peripheral artery disease and, on average, were age 69.

The two exercise groups, with their members wearing devices allowing their walking to be remotely monitored, were asked to try to walk 50 minutes five days a week at home. A coach encouraged them by telephone.

At the beginning of the study, and then again after a year, participants’ progress was measured with a six-minute treadmill test. On average, the high-intensity group could walk 34.5 meters farther than the slower walkers.

“To put it in real-world terms, maybe they can walk around the grocery store faster,” said Manini.

The pain induced by the low-blood flow, also known as ischemic leg pain, can be quite intense, with muscle cramping in the calves, thighs or hips. PAD, caused by a buildup of fat in the arteries, can cause a host of other symptoms, from weakness and numbness in limbs to erectile dysfunction in men. Risk factors include diabetes, smoking and aging.

“Although our trial did not allow us to identify why ischemia-inducing exercise was necessary to improve walking distances, it is likely that the ischemia induced by high-intensity exercise initiated some biologic changes that were necessary to improve walking performance in people with PAD,” said Mary M. McDermott, M.D., a professor at the Northwestern University Feinberg School of Medicine and the study’s lead author.

Using biopsy samples taken during the study, Leeuwenburgh will further investigate biological changes in the skeletal muscles of participants.

Bill Levesque joined the UF Health staff in May 2017 as a science writer covering the Institute on Aging and research of faculty physicians in the College of Medicine. He... END_OF_DOCUMENT_TOKEN_TO_BE_REPLACED